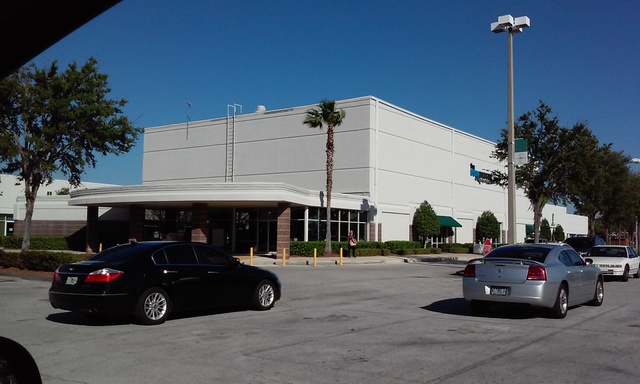 Located in the Phillips Highway Plaza Shopping Center. The 1,000-seat Plaza Theatre was a single screen theatre which was opened by Kent Theatres Inc. in December 1966. It was later twinned. It closed in the late-1980’s.

The Plaza Theater was located in Phillips Highway Plaza, a non-descript early enclosed mall. That stretch of Phillips Highway (US 1 in South Jacksonville) had been something of a wasteland at least since I-95 opened, even though I-95 was only a few blocks north. I assume the Plaza was an attempt to promote development in that area, but it wasn’t successful; that area is still dumpy.
The theater was an early example of a non-downtown first-run theater. It opened in the late-50s or early 60s. There was nothing ‘neighborhood’ about it; if you went there, you drove.
The Plaza Theater’s box office and entrance were inside the mall, something unusual at that time. The theater itself was large for a new theater of the time, and thoroughly undistinguished in design and architecture.
For a while, at least, the Plaza got some first-run movies. I recall seeing the Burton-Taylor-Zeffirelli ‘Taming of the Shrew’ there in 1967. The last movie I recall seeing there was “Earthquake” in 1974: the huge bass speakers that created the special rumbling effect were set at the back of the steeply raked aisles, and you had to walk around them to get to the lobby.
This one won’t have many mourners.

Saw Star Wars there in 1977. At that time there was no entry via the mall interior, entrance was outside. For many years there was an old locomotive on display nearby at the mall entrance, with easy access for curious/playful kiddies like me.

Roughly around 2000 the mall was converted to an open-air arrangement and switched from retail to business office space.

Gosh….I’m not feeling the love here! Did either of you ever make it to this theater before they twinned (and ruined) it? This theater was enormous! A huge screen. Great place to see a movie. I remember the comfortable chairs, and the walls that were paneled with dark mahogany wood (they used to tout that in the advertisements.) It really was an upscale theater in it’s day.

The Google streetview is looking across the street from the theater. “Turn around” to look across the parking lot at the theater building.

I took a picture today: http://i77.photobucket.com/albums/j54/Treadwell_Jay/plaza_zpsg4jrjcns.jpg

When I worked for EFC in Jacksonville during the early 1980’s, the Plaza was still operating. It was managed by Kent Theatres, and also served as their Corporate Headquarters.

The August 10, 1966 issue of Motion Picture Exhibitor ran this item about the future Plaza Theatre:

“Norman M. Kranzdorf, vice-president and general manager of Food Fair Properties Agency, Inc., announced that a 1,000-seat first-run motion picture theatre is to be built in the Philips Highway Plaza Shopping Center in Jacksonville, to be operated by Kent Theatres, Inc. The construction of the theatre by D. O. Foshee, Inc., marks the start of an expansion project at the shopping center. Lewis C. Medlin is architect for the theatre, which is to be opened by Christmas, 1966.”