Eureka Theater for the Arts (Official) 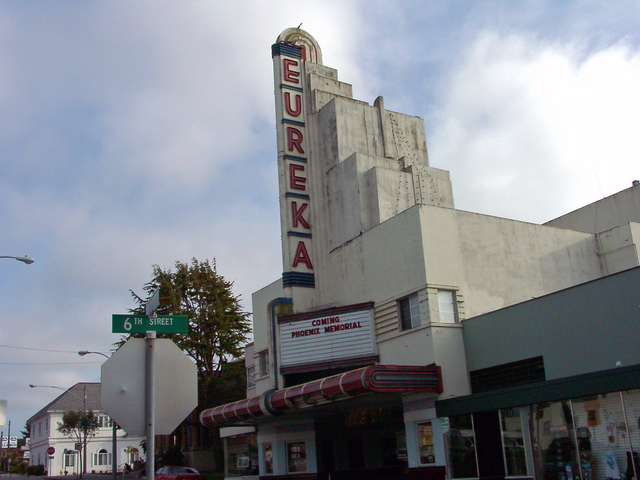 Construction of the Eureka Theater began in 1938 by George Mann, the founder of the Redwood Theatres Corporation. Mr. Mann, a well known name in the movie business went on to construct and manage many movie houses across the western United States. The Eureka Theater’s grand opening was on March 4, 1939, and showed the film “Going Places” starring Dick Powell.

The theater was converted to a triplex (with the balcony being split into two separate theatres) in 1978. The Eureka Theater closed its doors in 1996 due to the building of new multiplex theaters in the Eureka area.

In the late-1990’s, Bob Rickard, a longtime resident of Humboldt County and former Eureka Theater assistant manager, called George Mann II, grandson of the man who built the Eureka Theater, to talk about the theater’s lack of use and potential for restoration. With Mann’s blessing, Rickard began drumming up local interest in the theater’s rebirth.

In 1999, Eureka businessman Rob Arkley purchased the building from Mann and gave it to Rickard’s newly-formed Eureka Concert and Film Center. Shortly thereafter, the Eureka Theater reopened for the community to use.

The ECFC board, currently under the leadership of Wendy Petty, is now focused on restoring the building to its original state, while still making it available for event and performance rentals.

Currently, the theater has stage lighting and in-house sound system suitable for musical performances, and is also equipped to show 35mm films, with optical mono, stereo, or digital surround sound.

Can someone tell me what is the basis for attributing this theatre to William B. David?

recently; William B. David is listed as the architect in the article printed in the Humboldt Standard March 2, 1939. The day before the theater opened. I see you have a number of his theaters listed as your favorites, you may enjoy reading this pdf about him. View link

RedwoodResearcher:
Thanks for the newspaper citation (every little bit helps) and your response to my inquiry of a year ago. As you can see above, I had other responses at the time, and also did more research. And as it happens, I am acquainted with the author of the Davis Historical Society PDF file that you cite above, which incorporates my research in the year since my Feb 2007 inquiry here.

According to news reports, the earthquake of 01-09-10 has closed the theater at least temporarily and that damage has been done to its marquee.

If anyone at the Eureka Theater is curious about that gray wire hanging down inside the box office cabinet, just inside the right side front door, it is a wire to an alarm for the back doors of the downstairs theater. It runs up inside the marquee, across the ceiling and down the wall behind and to the right of the right side exit, in what used to be the carpenters room. The homemade ladder goes up to the attic. Just follow the wire up the ladder, across the attic, and down inside the marquee to the box office. Watch the wiring, it’s pretty old. A long single piece of wire. Just thought someone might be interested. It was quite the climb.

Not exactly one of the new owners better ideas. Renting video tapes would not have been tolerated if Mr. Rickard was still in charge. Buzz was as old school as it got. And a nicer employer one might never find in a lifetime.

The Eureka Theater sign and marquee are, were, wrapped in neon. The large letters were sequential at one time, but due to neglect and expense, they were eventualy changed over to a continuous mode. A shame, the sequential mode looked great. There were also two neon strings wrapping the awning around the outside, and “Vegas” style rotating lights in the cieling of the italian blue tiled entrance. In it’s day, it was a real show piece. George Mann spared very little when he built a new theater. And this was one of his nicer ones.

To ken mc: I’d love to get in touch with you regarding the comment you left about having staff rosters for the Rialto Theater listed in the Humboldt Standard. I am looking for a cameraman that is supposed to be associated with the theatre in the 1910s. I made a listing for the Rialto here: /theaters/33928/
If you get this message could you please let me know via the Rialto page? Thanks SO much for your help!