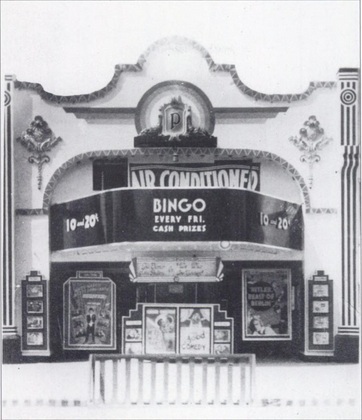 Three photos of this theater appear in the book Bartlesville, Oklahoma. The caption to the most recent of the photos, which probably dates from the early 1940s, points out the large “P” above the entrance to the theater, which indicated that the house featured Paramount films, though the name Paramount itself does not appear on the part of the building seen in the photo.

The house went by the name Gem Theatre in its early days (the oldest photo is dated 1920, but the building looks as though it dates from the 1910s) and it was later called the Dewey Theatre, which is the name painted on the side wall in a photo that is probably from the 1930s. The house is mentioned as the Paramount Theatre in a couple of issues of Billboard from the late 1940s and early 1950s.

The architectural style of the facade is Mission Revival, and it is suggestive of the Alamo, as was the case with so many small town Texas theaters from the early 20th century. I’ve found no photos more recent than the one from the early 1940s, but a Bird’s-Eye view at Bing Maps shows that the facade is largely unchanged from those earlier photos.

The actual location of the theater is the north side of East Don Tyler Avenue, a few doors west of Shawnee Avenue. Don Tyler Avenue might once have been called Main Street, but Google Maps doesn’t know that, and the current link fetches up an entirely different town. Google has no Street Views available for Don Tyler Avenue, either, so the closest view you can get there is looking west along the block from the corner of Shawnee.

Fantastic info and photos, Joe. Each photo has a new look for this cute theatre, and they all work.
I also really like that 1911 shot of Bartlesville High, wonderful architecture.
World headquarters for Phillips 66 Oil is located in Bartlesvilee and all that black gold cash fuels the economy for this region of Oklahoma.

It looks like on Google street view the address is 315 E. Don Tyler Ave.

The Dewey makes a comeback with a grand reopening on October 1, 1960. “If you want a show in Dewey, You must patronize it” was the friendly opening statement. Apparently the town wanted a more modern theatre because the place was rehabbed and had a grand re-reopening as the Capri Theatre on July 11, 1963 with Walter Bell and his wife in charge. It relaunched with Tony Curtis in “40 Pounds of Trouble.”