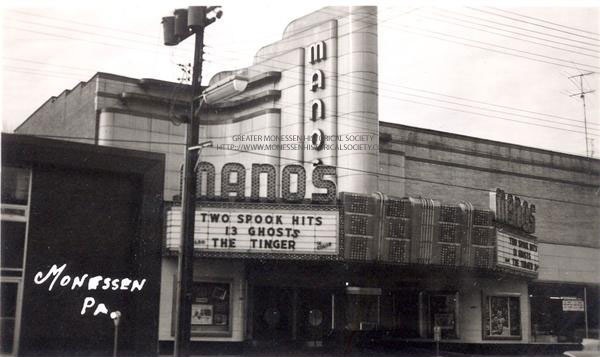 The Manos chain also had theaters in Tarentum (Manos), Vandergrift (Casino and Cinema I II III), and Kittanning (Cinemas IV – the only one still operating and now owned by Carmike).

There are other former Manos Theatres still operating. The Cinema in Laurel Mall in Dunbar, PA and Twin 40 Cinemas (now carmike 6 in Uniontown, PA)

There was also a Manos in downtown Uniontown, PA which was demolished in the mid 80’s. I saw my first movie there in 1975.

Didn’t they have the Liberty in Donora at one time?

In Toronto, Ohio, where I grew up, we had two theatres: the Manos and the Rex. I recaqll the Rex closing in the late ‘50s, while the Manos closed in the late '60s. Both of these were owned by George Manos. Mr. Manos lived on River Avenue in Toronto in a huge white home that we referred to as the “Manos mansion”. I recall when Mr. Manos would stop a movie if children became too rowdy in the theatre. In his heavy Greek accent he would announce that the movie would not re-start until everyone got quiet. I know Mr. Manos owned several theatres in Ohio, but unsure if he had any connection to the PA theatres of the same name.

Movie attendance is picking up in the Mon Valley. But not nearly enough to reopen any of the theatres darkened several years ago by the advent of television. That seems to be the opinion of district theatre men. According to a survey by The Daily Independent, there was pretty general agreement that movie attendance is “considerably better” than a year ago. However movie crowds are still much smaller than in the Hollywood heyday during the forties. Frank Bugala, of the Manos Theatre chain, said he attributes the recent increase in attendance to two factors, better films and a tendency on the part of the public to tire of television.

“We are booking some excellent movies into our Manos Theatre in Monessen and State Theatre in Charleroi,” Bugala points but. He added that both “Old Yeller” and â€œSayonaraâ€ played to good houses. Bugala said district movie-goers can expect these highly touted films in the weeks ahead: Peyton Dlace, Farewell to Arms,
Raintree County, and Witness for the Prosecution. Despite improving attendance, Bugala said the Manos company had no immediate plans to reopen he darkened Star Theatre.

In Donora, Mrs. Mary Davis, manager of the Harris Theatre, agreed that attendance is picking up. However the theatre, operated by Warner Brothers, is open only four days a week. On both Thursday and Friday, the Harris is open in the evening only. Two other Donora theatres â€"Liberty and Princess â€" have been closed for about eight years. There are no plans at present to open either, it was learned.

The only valley community which still has more than one movie house is Charleroi. Three theatres are still operating daily, the Coyle, Palace and State. All three reported “improved” attendance. Only one Charleroi theatre â€"the Menlo â€" has closed in recent years. In North Belle Vernon, the Verdi Theatre operates four days a week, Friday, Saturday, Sunday and Monday. In Belle Vernon, the Flitz Theatre has been closed for good and is now a school for bricklayers. The Bell Theatre in Fayette City is open on weekends. Attendance is about “50 per cent of what it used to be,” according to the manager.

Manos Theater in Grafton WV will reopen in a couple of months. Marquee is similar to one shown in 1948 photos posted by Ken mc.

The Monos Theater in Elkins WV still has a similar marquee to others mentioned above but theater has been altered to serve as a tourist center,

The Grafton venue is owned by the city and has been leased to an operator according to the Clarksburg Exponent paper of today. The city is trying to bring business back to downtown and is beautifying the area and trying to lure niche specialty shops to occupy other vacant stores owned by the city. It is hoped that theater will serve as a magnet to build traffic. The exterior of the theater is intact but looks tired. It’s appears to be of moderne style circa postwar but rest of building probably dates to 1920’s. forties

Here is part of an article from the Monessen Valley Independent in June 1984:

During a public hearing last night, Heritage Hills Tabernacle ran into some snags in its plans to convert the former Manos Theater into a church and school. Heritage Hills is requesting a conditional use of the theater as a place to house its Mon Valley congregation and to establish a school of Christian education. The Pittsburgh-based church organization purchased the theater owned by Manos Enterprises of Greensburg this spring. The theater had not been in use for almost two years.

Heritage Hills was instructed by city officials to petition for a hearing before the six-member Planning Commission because the church planned to change the use of the building and because it had been vacant for well over one year. The hearing last night was to “gather information” about the group’s plans for the building, its property and storeroom, chairman George Konstantinides said.