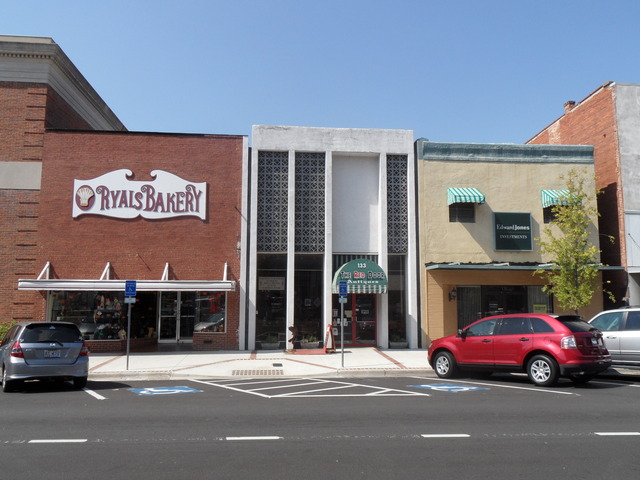 The Palace Theater opened in 1910. According to the Georgia Historical Society it was the first motion picture theater in Milledgeville, Georgia. This theaters claim to fame was the fact that Norvell Hardy (aka Oliver Hardy of Laurel and Hardy fame), worked at this theater as a projectionist. Oliver Hardy stopped working at the Palace theater in 1913.

The Georgia Historical Society site doesn’t specifically say that the Palace opened in 1910, only that Oliver Hardy remained in Milledgeville and worked at the Palace when his mother left town in 1910, and that the Palace was the town’s first movie theater. Unless there is some other source that provides firm 1910 opening date for the Palace, we have to consider the possibility that the theater might have been in operation for some time before Oliver Hardy became its manager.

In fact it seems very unlikely that Milledgeville would not have gotten its first movie house until 1910. It was a good-sized town by 1900, with over 4000 people, and had actually been Georgia’s capital city from 1804 until 1868.

If the Palace did open as late as 1910, it probably wasn’t Milledgeville’s first movie theater. The September 19, 1908, issue of The Moving Picture World had this item: “Milledgeville, Ga.—F. W. Butts has leased a store in the Elks Building and will install a moving picture show.”

Perhaps Mr. Butts' project never got off the ground, or perhaps his theater’s existence was very brief and has been forgotten by local historians. I’ve been unable to find any other information about the Elks Building except for a Wikipedia article about the Twin Lakes Library System, which says that Milledgeville’s first library opened in the vacant Elks Building in 1938, but it indicates that the building was located on Hancock Street, so Mr. Butts' 1908 project must not have been the Palace Theatre.