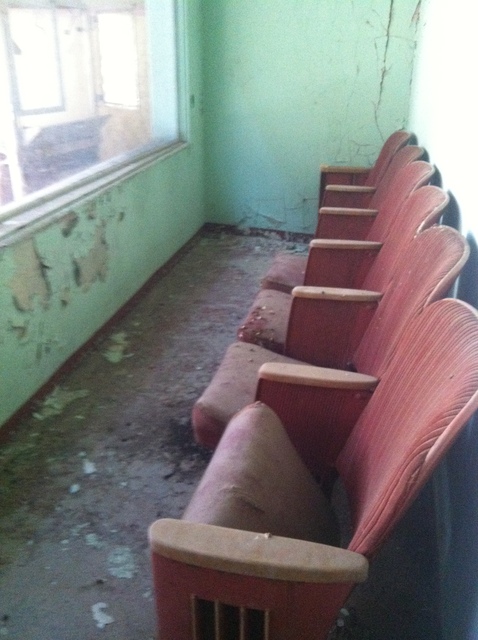 The Art Deco styled Long Theatre prospered during Hollywood’s “Golden Age”, and was owned by Lewis Bill Long. The Long Theatre was opened on May 31, 1947 with Randolph Scott in “Trail Street”. It was still open in 1964.

The Long Theatre was the first movie house in Keyes, which, according to a May 10, 1947, Boxoffice item, was a town of 227 when the 250-seat theater opened that month. Lewis W. Long was the owner of the house. The Long Theatre was still in operation at least as late as 1964, when it was mentioned in the February 3 issue of Boxoffice.

My grandfather was Lewis Long. My mother, Billie Long, grew up in Keyes and lived above the theatre most of her life. I just got back from a visit to Keyes. It was very sad to see the state of the theatre. From what I understand they are going to tear it down.

There is still a glimpse of hope for this place. The owner wants to renovate it to the original art and deco style. Historical / arts grants, partnerships, and funds are being researched at this time but a structural report and funding will eventually determine her fate.

I would love to see that happen.

Please keep me informed of whatever you find out.

The Long Theatre opened May 31, 1947 with the film “Trail Street.” Historically, the theatre opened as Hollywood’s Golden Era was ending and the TV age was about to begin. An oil boom post-War both was the reason the theatre was established and would help the theatre survive as population increased by almost 90% by decade’s end and added another 60% by the end of the 1950s. But that growth was followed by population declines which were among the reasons the theater’s viability became more challenging. The theatre eventually closed and the town’s population began a descent taking it to around its pre-oil boom size.