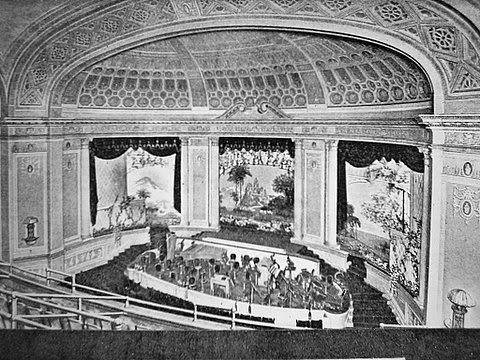 The original “Temple of the Motion Picture” and “The Shrine of Music and the Allied Arts”, the Rialto Theatre was built on the site of the former Hammerstein’s Victoria Theatre on the corner of Broadway (Times Square) and W. 42nd Street. The Rialto Theatre was opened on April 21, 1916 with Douglas Fairbanks in “The Good Bad-Man” & Roscoe (Fatty) Arbuckle in “The Other Man”. Under the personal direction of S. L. Rothapfel (Roxy), the Rialto Theatre show ran five times daily and included the Rialto Orchestra, vocal and instrumental solos, and “accompaniment contributed by the grand organ”.

“For the convenience of patrons

Ladies Retiring Rooms on the First and Second Mezzanine Floors

Gentlemen’s smoking rooms, off the Main Floor and Second Mezzanine

Writing tables and Check Room on the First Mezzanine Floor

Drinking Water on the First and Second Mezzanine Floors, filtered by the Puro process

Carriage Call on the South Side of the Main Lobby

This theatre, with every seat occupied, can be emptied in less than three minutes".

A Paramount-Artcraft Strauss house, the Rialto Theatre featured a weekly film with the bill changing every Sunday.

Next door to the Rialto Theatre and over Child’s Restaurant was the Republic Restaurant.

“The most beautiful and cleanest Chop Suey and Tea Parlor in New York”.

“The Rialto Orchestra, maintained by the Rialto Theatre Corporation, and conceded to be the finest organization in existence devoted to motion pictures, enjoys through special arrangement with the Carl Fisher Company, access to and the use of the largest and most comprehensive musical library in America.”

The Rialto Theatre was taken over by Paramount/Famous Players in 1919. The World Premiere of the 4 Marx Brothers in “The Cocoanuts” was held here on May 23, 1929. It was closed in May 1935 with Henry Hull in “The Werewolf of London” and was immediately demolished.

Thanks Tinseltoes,Bela Lugosi was the Man of Horror in those days of real Horror movies,not this trash they peddle today for Horror.

I added two of Warren’s really nice photos to the photo section before the links are lost.

Here is a Rialto Theatre program from July 27, 1919. Dorothy Gish’s NUGGET NELL (1919) was the main feature, and 10% of the ticket price went to the government for a war tax.

I can’t believe this theater lasted less than 20 years.

Was the Rialto on the northwest corner of 42nd & Broadway, where the ESPN Zone is today? Due to all the new big buildings in the area, it’s hard to pinpoint the exact address today.

AlexNYC, it was on the Northwest Corner of 42nd Street and 7th Avenue where Chase Bank is today. ESPN Zone, once east on Broadway, is already gone.

After this theater was demolished, a new Rialto link was built on this corner and operated as a movie theater from 1935 to 1990 and for many years specialized in two-fisted melodramas and horror movies. Its manager once said his theater, both in styling and presentations, sought to satisfy the “ancient and unquenchable male thirst for mystery, menace and manslaughter.”

Here are excerpts from the NY Times review of this house’s last picture, “Werewolf of London”

The Rialto Theatre, which began its career as a picture house on the night of April 22, 1916, by showing Douglas Fairbanks’s “The Good Bad Man,” is bidding farewell to Times Square this week with a nerve-jangling exhibit called “The Werewolf of London.” The theatre will be demolished after the last screening of the picture next Wednesday night, but a new Rialto will be erected on the site and open its doors to the public some time in October.

Designed solely to amaze and horrify, the film goes about its task with commendable thoroughness, sparing no grisly detail… Granting that the central idea has been used before, the picture still rates the attention of action-and-horror enthusiasts. It is a fitting valedictory for the old Rialto, which has become melodrama’s citadel among Times Square’s picture houses.

@NYer “What were they thinking?” Indeed. The age-old preservationist’s lament, echoed down through history. Living in Manhattan and being one who bows down at the rapidly vanishing glorious cathedrals of live as well as filmed performance, I often find myself traveling through Times Square, and in my mind, ennobling that forsaken wasteland with memories of the ghosts of movie palaces past.