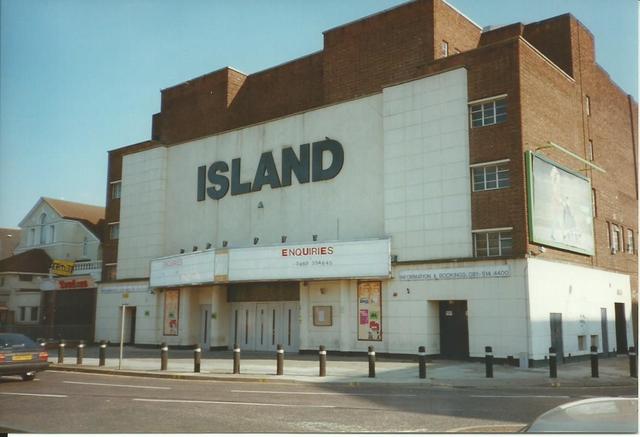 Located in Ilford, Essex, today a district in the east of Greater London. Built for the Associated British Cinemas circuit(ABC) and designed by their house architect William R. Glen. The Regal Cinema opened on 26th July 1937 with Clark Gable in “No Man of Her Own” and Claudette Colbert in “Maid of Salem”. Wilson Oliphant entertained at the console of the Compton 3Manual/6Rank theatre organ.

The facade was quite plain, the only relief from the brickwork of the building was a large panel over the main entrance in white stone. Inside the auditorium seating was provided for 1,274 in the stalls and 700 in the balcony.

From 14th October 1962 it was re-named ABC and in May 1973 it was converted into a triple screen with seating for 692 in the former balcony and two small screens in the former rear stalls seating 156 and 157.

The ABC closed on 28th January 1984 with “Trading Places” showing in the main screen and “Never Say Never Again” and “Brainstorm” in the two smaller screens. The building was converted into a bingo club, later taken over by Granada Theatres who re-named it Granada Bingo. The building was de-tripled for this use. When it closed as a bingo club in 1989 it lay empty for a while until November 1992 when it became ‘The Island’, a venue for live pop concerts. This remained open until April 1998 when it was closed for ‘upgrading’ to provide better facilites to the then 2,500 capacity building (it was standing only in the former stalls with seating still remaining in the balcony).

By November 2001 ‘The Island’ had closed and the building was in use as a banqueting hall serving the Asian community which remains open. A false ceiling has been extended across from the edge of the balcony hiding all trace of the original decoration. In 2006 this is known as the Prabas Banqueting Suite.

The former balcony area had been divided off from the main auditorium and was open as the 650 seat Ilford Cinema screening ‘Bollywood’ films. I believe this closed in 2002.

The main foyer area of the former Regal Cinema is in use as a pub named ‘The Overdraft’.

A scan of a photograph I took of the building in the summer 1994, when was operating as ‘The Island’ concert venue:
http://www.flickr.com/photos/kencta/152495563/

A more recent photograph showing the Ilford Cinema sign and entrance (a former balcony exit) and the main foyer in use as a pub:
http://www.moviebunker.com/ilford_cinema.htm

Saturday morning pictures – c1956. We were “minors of the ABC” and there was a song called that, which we all sung before the films started. We had ABC badges. Strange that it wasn’t called ABC until 1962.