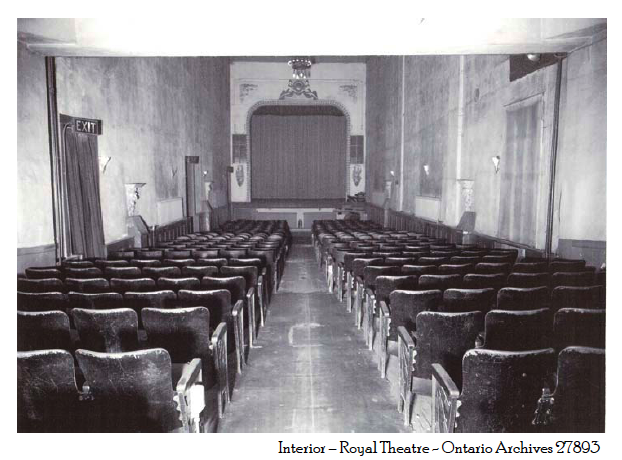 This cinema opened at 66-68 King Street West in Hamilton in July 1913 by Hayes and Richards, who had a poolroom and a cigar store two doors west.

The Hamilton Spectator reported on June 15, 1927 that the property had been sold for $125,000 by then-owner Harry Levitt to Abraham Mack of Niagara Falls.

For nearly 40 years, a popular Hamilton movie house, the Royal Theatre on King Street West, was closed last week as the lease expired and preparations went forward for another business venture in its place.

Two generations of movie immortals had crossed its screen, rain-flecked silent films were gone and ‘talkies’ established as the neighbourhood house closed its doors.

The Royal’s continuous parade of drama, comedy and thrilling western action, brought popular stars like William S. Hart of the old west, and Rudolph Valentino, the svelt lover of the 20s. Francis X. Bushman, Theda Bara, Gloria Swanson and a host of others thrilled countless patrons there.

No announcement has yet been made concerning the type of business to replace the Royal on its venerable site. Latterly, the entertprise had been jointly owned by a local woman and Odeon Theatres".

I’m not sure what happened after this last purchase, but in 1973 Lloyd D. Jackson Square opened, the project eventually consisting of a shopping centre and office towers, the Hamilton Public Library, Main Branch, the Farmers' Market, an Eaton’s store and Copps' Coliseum.

I checked the city directory for this theatre. It stood on the north side of King Street half way on the block between MacNab and Park, which today only goes as far as York, but originally went all the way up to King Street. This would have placed it approximately where the entrance to the parking garage is for the Sheraton Hotel.

All of these properties were expropriated by the city in the mid 1960’s and then demolished.