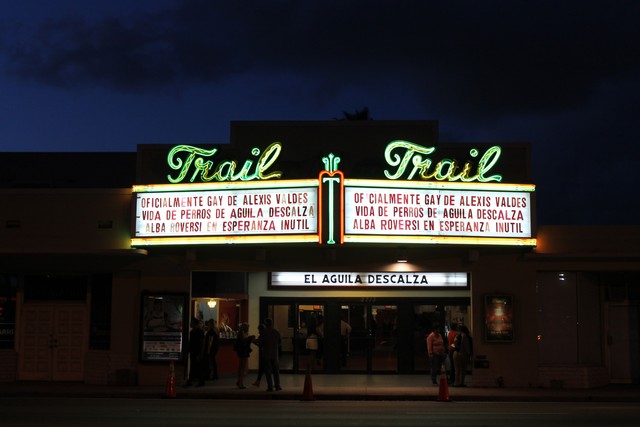 Opened on September 1, 1948 by the Claughton Theaters chain. The ‘free’ matinee performance was Shirley Temple in “Rebecca of Sunnybrook Farm” and the evening show was Peggy Cummins in “Green Grass of Wyoming”. The Trail Theatre was a sub-run, 960-seat movie theatre for most of it’s life. Spanish subtitled and Spanish films ruled through the 1960’s through to the 1980’s with Cuban themed live politcal satire and bawdy comedy plays taking over the house in the 1990’s along with the occasional live musical act. Closed in Spring of 2006 for code violations, conveniently when the comedy (“Dick & Pusy”) offended some locals, the Trail Theatre was up for grabs once again.

Located on Tamiami Trail (8th Street) and 37th Avenue (Douglas Road), the Trail Theatre is within Coral Gables city limits and therefore does not technically qualify as a Calle Ocho locale. Previous efforts to join the once triving Coral Gables first-runs failed as well as that cluster was closer to Miracle Mile.

A 1984 effort for an exclusive run of The Talking Heads' “Stop Making Sense” with quadrophonic sound failed miserably but first subtitled runs of blockbusters such as “The Godfather” and “Raiders of the Lost Ark” always filled the house along with any Cantinflas re-release.

It reopened as a Spanish language live theatre on January 29, 2011, with a reduced seating capacity of 430.

…and more about Trail Theater.

We hope to see you there!

A recent photo of the Trail Theater.
View link

There used to be a Royal Castle on the corner. I remember seeing “The Green Berets” there. Armando Roblán had his live plays on the stage for years and lately variety shows.

This Theater is on the north side of SW 8th st and therefore not in Coral Gables. Seems like a Calle Ocho theater to me.

This theater was built in the early 1940s by my father, Edward N. Claughton and was one of several Claughton Theaters owned and managed by my family in greater Miami, Tampa and Boynton.

Correction: The TRAIL THEATER was built by my Father Edward N. Claughton in the mid 1940s and was one of a chain of 14 Claughton Theaters in Florida. It did not become a Spanish theater until after my family sold it the 1960s.

The Trail theatre was opened by Claughton Theatres on September 1st, 1948 with 2 grand openings. Ad posted.