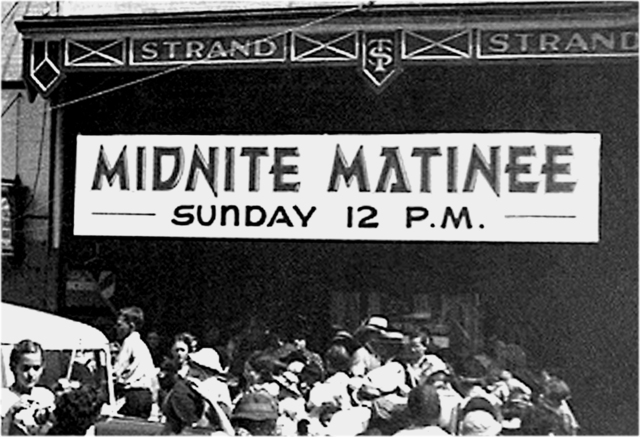 Opened in 1913 as the Hippodrome Theatre, it was renamed the Wade Theatre and featured burlesque.

In 1960, it was torn down, together with the Rialto Theatre and the Capitol Theatre for parking.

A 1948 movie poster from the Strand Theatre in Dallas featuring Monte Hall in “Son of Gods Country” and an autographed photo of Monte Hall on his horse, Pardner.

An old movie theater ad from 1949 for the Strand Theater.

Status should be closed/demolished, per the introduction.

A view of a crowd at the Strand Theatre in Dallas, Texas.

Don, any idea when that pic you posted dates from? Post-1947, obviously, but more specifically?

The Hippodrome was built for moving pictures opening in 1913 but found that live stage shows worked into its business plans. The theater became the Joy Theater in 1933, the Wade Theater in 1942, and then in 1946/7 became the Dallas Theater, the Downtown, and the Strand Theatre (and technically, the Strand Theater) before being bulldozed in 1960.

Lang & Witcher architected and Gilsonite Construction of St. Louis built the two-story, fireproof theater that opened March 1, 1913 and replaced a facility that had burned a year and a half earlier. The $120,000 structure was built for motion pictures with a seating capacity of 1,200 (850 downstairs and 350 in the balcony). The Pilcher pipe organ was said to be the largest ever installed in a movie theater in the U.S. and the “finest west of the Mississippi.“ It would be used in tandem with a seven piece orchestra. R.A. Bennett painted the 17 allegorical figures of the Roman school and a Roman chariot race was depicted on the giant curtain.

Tom P. Finnegan managed the theater and was on hand for the grand opening in 1913 and its demolition in 1960. The Hippodrome’s motto was “always a good show” as it brought the first, longer 50 cent movies to Dallas. The first of those was “Les Miserables"and it had the Dallas' premiere of “The Squaw Man” and Mary Pickford’s “The Bishop’s Carriage.”

As the 1920s and early 1930s brought major competition to the Elm Street Theater Row, the Hippodrome began to be known for live shows including Billy House’s Follies of 1920 perhaps a step ahead of burlesque and a rung or two down from the vaudeville houses. Its midnight shows had performers described as hootchy-cootchy dancing which drew audiences and legal scrutiny in that era. But it also brought in the most money so the theater found itself more in line with Fox Theater in appealing to that audience.

In 1933, new operator M.N. Baker changed the Hippodrome to the Joy Theater where it began a checkered run. Manager M. Midyet was arrested just months into the Joy’s run when police raided a live performance arresting the manager and two performers. Later that year, the city shut down the Joy for presenting indecent shows with the judge calling the dancers in to recreate the event. More publicity occurred when one of the comedians at the club inadvertently struck and killed a girl in a vehicle accident. The next owner of the theater was then found dead in 1937 just after the last show that night.

New owner Frank Nick rebranded the Joy as the Wade Theater in 1942. Not long after, the Joy’s name would be in use at the Circle Theater. The Wade continued the Joy’s burlesque-film concept. It showed “The Condemned,” a movie about syphilis along with the controversial “Birth of Four Babies” which sold out numerous shows. The Wade was probably better known for live stage attractions with dancing girls and striptease artists such as Ermain Parker, the “Texas Tassel Twisting Hurricane” and Murial Page with her fan dance. The theater always had a feature but the attraction was personalities and theme shows like the “Swing Shift Revue” or “Silk Stockings Show” and some African American shows at the end of its run.

Wayne Babb bought the theater in 1946 to end the burly shows and rebranded the space as the Dallas Theatre, a family showplace. When the live shows weren’t working, the theater had a very brief period as the Downtown Theater in which there was likely no name on the marquee but double features of second and third run films.

On January 7, the theater became known as the Strand Theatre continuing its discount double features. It closed and was obtained by the operators of the Joy Theater in Dallas. Run by Joy Houck of the H&B Theater Circuit, Houck invested $100,000 on the Strand Theater putting in all new seats and projection operating the discount house a rung above the Joy. It opened with “The Unfinished Dance” November 15, 1947. Ads cease in February of 1953. A tailor moved into the space in 1953.

In 1956, the Strand re-opened as a burlesque house which lasted about one year and ceased operations. In March of 1957, the theater became a sports-themed theater along with re-establishing itself as a third-run movie house. For its opening, the legendary Gorgeous George grappled with Enrique Spindola. Sports films of boxing matches and items associated with early pay television were shown at the theater. And at the very end, the Strand tried Spanish language films but with the Capitol converting about the same time and Panamericano doing brisk business, it just wasn’t in the cards for the Strand. That’s how the theater closed and it was bulldozed as part of a grand “City of Tomorrow” urban redevelopment in downtown Dallas in January of 1960.

The Jan. 25, 1960 issue of BoxOffice ran an interview with Tom P. Finnegan that was mostly a summary of dallasmovietheaters' thorough history above. A minor addition was the marble. “Yes, sir,” Finnegan said, “there wasn’t a finer movie theatre in this part of the country when the old Hippodrome opened for business in 1913. We had all the latest equipment and facilities for the comfort of the audience. And we put in long slabs of marble down each side of the house to enhance its beauty.”