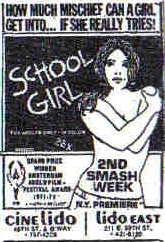 Marylyn Chamber’s INSATIABLE? Well, I didn’t know you were going to bring up the classics, Ed.

Here is how I see it:

I realise some of these sequences may have changed over the years.

Thanks Al… at least you and I seem to be having some fun on this page! So… what became of the Cine Lido? Didn’t it front on Broadway? The address indicates an entrance on the short side street between 7th and B'way. Is this the block that the Playland arcade ran through? Or was it the next block down between 47th and 48th?

Regarding Cine Lido… we started touching on this block over on the Rivoli page and someone mentioned that the place went legit for a short stretch and a play called “Pump Boys and Dinettes” played there in the early ‘80’s. I looked the play up on ibdb.com and found it played at the Princess Theater from February 1982 to June '83. If the Princess was converted from the former Cine Lido, that would preclude any of the Pussycat theaters in my ads from March of '82 from having been the same theater.

One more thought… would the Pussycat 2 be the same as the Kitty Kat which was on 49th between B'way and 8th?

I can confirm PUMP BOYS AND DINETTES was advertised at 200 W 48th street on June13, 1980 (NYT) so I guess it did go legit at least for a while. Did PUMP BOYS really run that long?

I’m thinking the Kitty Kat was on 49th across the street from the legit Ambassador Theater. I was just wondering if this became the Pussycat 2, being as it was right around the corner from the Pussycat/Grand Pussycat (former Trans Lux West) that faced Broadway.

Hey AlAlvarez… you ought there? I thought I’d revive this thread with the following ad from the 1/25/1978 edition of the Daily News:

Wilder Expectations
The day and date policy between the Cine Lido and Lido East is still in effect… And from other ads I previously posted here, we know that the association between these two theaters was terminated sometime before December, 1980, by which time the Lido East had partnered with the Pussycat/Grand Pussycat (in the former Trans Lux 49th Street).

There’s still no posting for the Cine Lido. I wonder if either you or Robert R have sufficient info to add the listing (despite Warren’s inevitable protests)… I know I do not. Anyway, I wonder what the girls starring in “Expectations” would have made of Gene Wilder’s boasts in the adjacent advertisement?

Ed, I will try and collect some more for information this. I was a theatre manager in Miami during this period and we certainly weren’t above showing the combo above at the twin while making sure the kiddies didn’t screen hop.

One of the movies in the ads was also playing at Eastworld, which was at 61st St and !st Ave. I remember going there once . There is no listing for it on this website , maybe it’s under a different name?

First newspaper listing for the Lido East was on May 27th, 1970. No ad found.