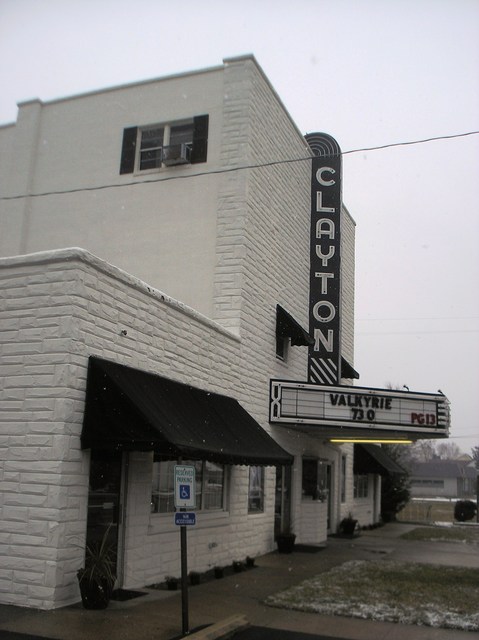 The Clayton Theatre was built in the 1940’s in the small town of Dagsboro, Delaware, population 2000. This freestanding theater has a stage, and a balcony that is closed off.

I was just at this theate. It is quite run down inside. The ceiling is peeling. The sound system has not been updated since god knows when, and is in Mono and only from whatever small front speakers are behind the screen, which makes the sound hardly audible.

Even though this is an old house, they do seem to have anew screen. There seems to be a curtain above it, however it was not used when I was there.

I noticed looking up from the main room to the closed off balcony, that there was some BOSE sound equipment sitting up there… stored maybe.. Maybe for future enhancements.

There is a little tiny parking lot next to the theatre. Looks like someone just dumped tar there, and it was not originally there.

The bathroom is very small… The auditorium is small as well. The marquee was lit up with green neon. Ironically, there is a video store in the building that holds the theatre.

has anyone else ever visited this place? It os the only single screen in that part of Delaware. No commercials before movie.. and not even a no cell phones trailer either. Screen size was good.. Sound unbareable.

Listed in the Film Daily Yearbook;1950 edition with a seating capacity of 500.

Hello Mike, John Messick here. I have visited this theater several times. I have relatives that live in Georgetown, which is just right up the road. Several years ago the Clayton got new owners who upgraded the marquee and paved the tiny parking area. Usually during the summer the place is packed with people every night. The street is lined with cars on either side. The theater does need some improvements inside, seating and wall coverings and of course the ceiling. Were you vacationing at the shore? Would you believe up until a few years ago the Clayton still had the original carbon arc projectors! And it is the only single screen in “Slower Lower Delaware”.

This theatre is a little slice of nastalgic heaven. It reminds me of my wonderful childhood in the “50’s”. We love to have family night there. The restroom is imaculate and the theatre itself,very clean. The owners have done a wonderful job. With all the influx of overbuilding in our area this place is a treasure. I will take this over any Cina Plex anytime. Thank you.
LDennis, Millsboro

In 1980 it was listed as the New Clayton in the IMPA. It was then part of Midway Theaters of Rehoboth Beach.

I am going here tomorrow… Looking forward to sitting in this piece of history.

The theatre is actually at 781 Main St (at least according to google maps). The google maps marker for the theatre is at 900, but there are just several houses at that location and I believe it was misplaced.

Looks like they’ve done some work on it. It’s digital now.