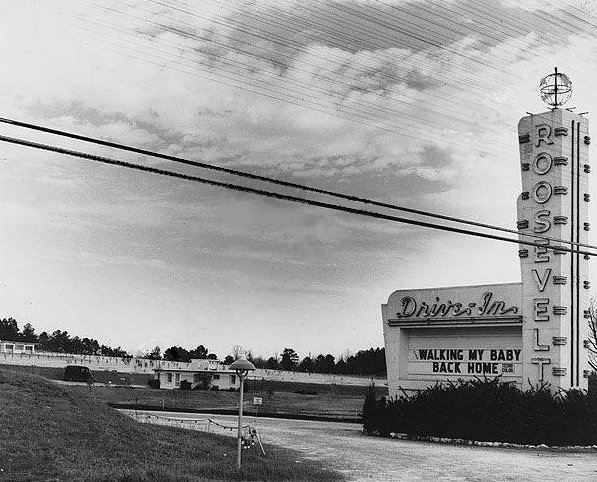 Opened September 1, 1950 with Randolph Scott in “The Nevadan”, the 500 car capacity Roosevelt Drive-In was located in College Park, GA, south of Atlanta. It featured a nice snack bar and a very impressive marquee. Closed about 1975, due in part to noise from the near-by Atlanta airport.

The Roosevelt Drive-In frequently showed sci-fi and horror movies during the 1950’s and 1960’s, as well as generous helping of lighter family fare. It was an extremely popular and well-run theatre during the golden age of drive-ins. It was closed in 1982.

You can see the ramps if you use Google Earth’s historical images or historicaerials.com. They disappeared around 2000.

I grew up in College Park and East Point before moving to Birmingham, Al at 13 yrs old in 1974. Then once in the late 1980’s I was visiting Atlanta and drove out to College Park to see my old house which was now under a flight path and all the houses were gone. I then cruised down to try and find the old Roosevelt Drive In and could just barely make out the ramps which were overgrown. I remember seeing the comedy “What’s Up, Doc” there and a lot of the kids would sit in the few rows of seats in front of the concession building.

The above address is mapping incorrectly. Should now be 2939 Georgia 14. The drive in entrance was just east of Yates Road.

This opened on September 1st, 1950. Grand opening ad in the photo section.

After years of being overgrown someone has taken over the land and is redeveloping it.

I think that JFB was correct in the very first comment on this page. GTC closed down several of their marginal drive ins during the fall and winter of 1982-83. At least two others were the Lithia and the Bankhead. South Expressway and NE Expressway stayed open until the 1987 sellout to United Artists Theaters which quickly closed all but the Starlight which reverted to its co-owner, DeAnza.

The southwest corner of town was getting to be a rough place for a business that operated into the early hours of the morning. In 1981 an employee at Bankhead was stabbed by an unruly customer. The fact that the property of at least two of these three locations stayed vacant for decades shows that they did not close in order to make a profit by selling the location but indicates that they were just not worth the trouble and liability any longer.

Another consideration was that the long time managers at these theaters, Alpha Fowler at the Lithia, Sylvia Partee at the Bankhead, and Roy Overton here had been in their positions for decades and there was not exactly a line of qualified would be theater managers waiting to start a career in these places. In the early 80’s the Saturday entertainment section of the AJC did a feature on Roy and his over 30 years managing here. In it he told some Drive in stories and claimed that he had never watched a single movie that he ran. I did not know Roy well, but I was not at all surprised by that claim.

Given the timeline of the life of this theater it is possible that Roy Overton was the only manager it ever had.

Boxoffice ran a full page about the Roosevelt in its Nov. 11, 1950 issue, including plenty of photos. Not obvious from those pictures: “The drive-in tower provides an attention-getting device in the revolving lighted ball sitting atop it.”

Drove by the old sight and someone is putting up what appears to be a warehouse.