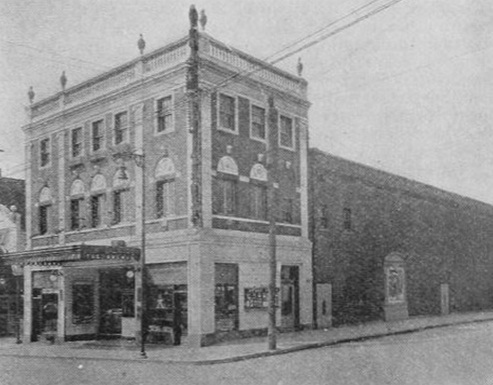 The Belmar Theater opened in November 1914. By 1922 it was operated by the Rowland and Clark Theaters chain. It had been equipped with a theatre pipe organ supplied by Peloubet & Co. of Oakland, CA. It was closed in 1970.

The Belmar was the largest and apparently the nicest of the theaters in the Homewood-Belmar section of Pittsburgh.

It opened in 1915 as Belmar Photoplays and soon shortened its identity to the Belmar.

The theater played late-run double bills, the last of which was a United Artists combo of the then-recent “Midnight Cowboy” (1969) and “Hour of the Gun” (1967).

The Belmar closed in 1970 but remained in place for many years thereafter with the titles of the final fouble feature on the marquee. Eventually it was razed.

The Belmar Theatre was one of several Rowland & Clark houses designed in the mid-1910s by architect Harry S. Bair. It opened in November, 1914, according to an article in the July 15, 1916, issue of The Moving Picture World which quoted James B. Clark.

The 1963 photo of the Belmar Theatre’s marquee can now be seen at this link.