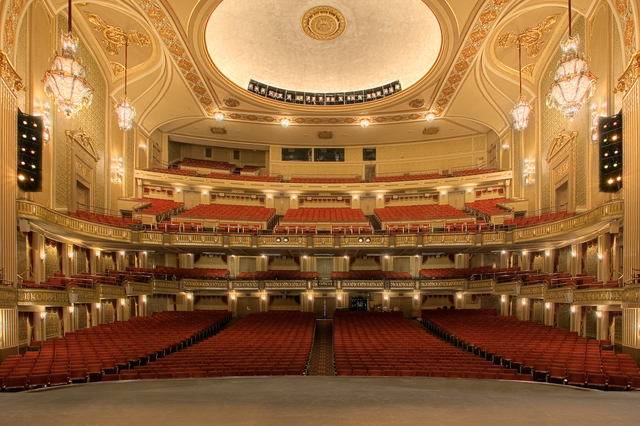 The Grand Opera House opened on the corner of Main Street and Beale Street in 1890, and was touted as the finest opera house outside New York at the time. Originally used for opera and plays, Col. John D. Hopkins continued the tradition beginning in 1899 and put his name on the theatre sign. The Grand Opera House soon was featuring vaudeville acts, and in 1907 became part of the Orpheum circuit. It was renamed the Orpheum Theatre that same year. In 1923, a fire broke out and the old Orpheum Theatre was burned to the ground. Luckily, the theatre was empty at the time but the largest crowd in its history gathered to watch. (The first Orpheum Theatre has its own page on Cinema Treasures.)

Five years later, on the site of the old theatre, a new Orpheum Theatre was built at a then-staggering cost of $1.5 million. Twice as large as the old theatre, and much more ornate and luxurious, decorated in the style of Francois I, the Memphis Orpheum Theatre was beyond anything the builders of the old opera house could have ever dreamed. It was the last and largest of the Memphis movie palaces.

The Orpheum Theatre opened on November 19, 1928 with Corinne Griffith in “Outcast” and acts of vaudeville on the stage. The auditorium, which originally seated 2,600, was decorated in shades of gold, red and cream, and included a huge stage, orchestra pit, three balconies(one originally a separate ‘colored’ balcony) and domed ceiling. The Orpheum Theatre also owns a Mighty Wurlitzer 3-manual 13 rank organ. The grand lobby was the most spacious in Memphis with its twin staircases, enormous crystal chandeliers and gilded plasterwork. During the 1930’s the Orpheum Theatre operated under several managements after the Orpheum circuit bowed out. Entertainments included black performers such as Jimmie Lunceford, films and the occasional girlie show. It challenged the Sunday Blue Laws by serving sandwiches in the lobby with a movie as a bonus and contributed to the laws being overturned.

On April 19, 1940, the Orpheum Theatre was purchased by the Malco(M.A. Lightman Co.) chain and switched to a movies-only format, renamed Malco Theatre. Special events continued to take place there, the organ was maintained and it became the place to see horror movies and Disney films. It survived a threat during the 1960’s of being replaced by an office building, happily during the run of “Goldfinger” when lines were around the block. Two stage shows played the Malco Theatre in 1972 and people began to see the theatre as a potential stage venue. The Malco Theatre was offered ‘For Sale’ on September 13, 1976 and continued top run first-run films until it closed later in 1976.

In 1977, the Memphis Development Foundation acquired the Orpheum Theatre and began booking a variety of events on stage and screen. In 1982-1983 a $5 million renovation project brought the palace back to its 1928 glory after decades of decline. The Orpheum Theatre now contains a patron lounge called the Broadway Club, created when the old commercial spaces on either side of the lobby were connected in the 1983 renovation.

In January 1984, a grand reopening ceremony was held. A second renovation in the early-1990’s expanded the stage so that the most complex touring shows could play there.

I added a pic I found on the net of the Orpheum as the Malco in the late `50’s. Elvis appears to be getting a ticket in front.

Great photo David,The Loews State can be seen in the background also.

That is a very interesting photo of the Orpheum, have not seen that one before. Whatever is on the marquee has been carefully retouched out. Note Milton Slosser’s name on the reader board.

If you haven’t seen it already, the Memphis Orpheum is on both front and back covers of this quarter’s Marquee magazine from the Theatre Historical Society.

Here is a Historic Film Row link, related to the film vault photo I just added to the gallery. 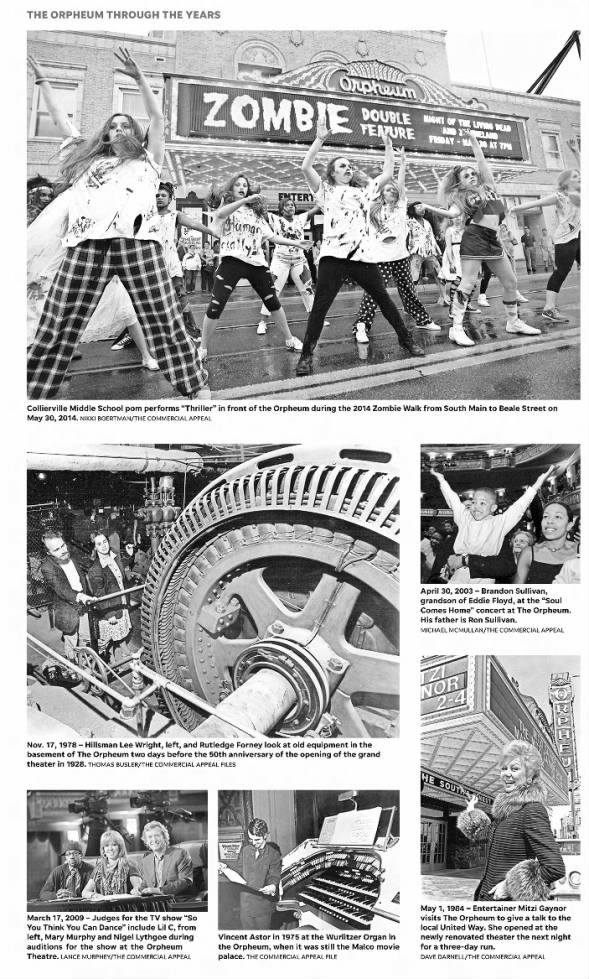