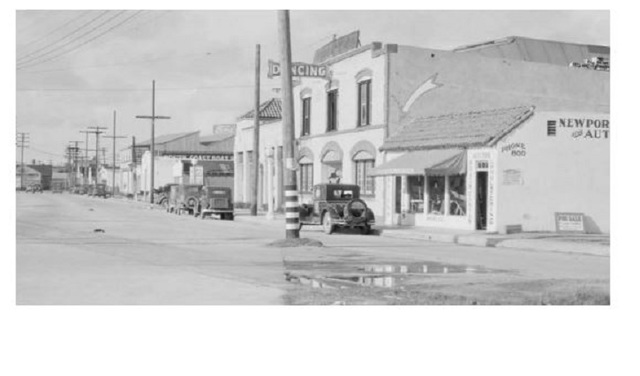 The Newport Theatre was opened August 26, 1927. The Costa Mesa Globe-Herald archives show that this theatre, a former store, took only a month to construct, which was rather rapid even for a remodel of an older building. The building still stands and it appears this remodeling may have included the raising of the roof. Records show that the C.A. Balch-redesigned theatre was on Central Avenue, later renamed Balboa Boulevard. When this project was first announced it was a 1,000-seat project but later listing in the Film Daily Year Book show it’s seating as 810.

When it reopened on June 30, 1939, its manager was Earl Strebe, who, according to the press, owned six other theatres and was said to be very experienced in operating theatres at resorts such as Palm Springs and Lake Arrowhead. The theatre not only opened in time for what was called “summer throngs” but it got the jump on the Lido, which opened in the fall.

At the time of it’s opening, the Globe-Herald said that Strebe was also operating the Ritz Theatre (later renamed the Balboa). One puzzling thing: When the Lido, less than a mile away, did open on November 10, 1939, its stylized lettering in its newspaper logo was the same as used for the Ritz and their ads sat side-by-side. It is not known if the operators of the Lido, H.J. Siler and Mason Siler had purchased the Ritz by then. One thing is for certain: When the Ritz completed its remodeling and transformation into the Balboa and opened on April 3, 1941, the operators were announced in the local press as the Silers but Southwest Builder and Contractor on April 4th said that “Strebe reopens Newport Theatre”, meaning the Balboa. Perhaps Strebe was in partnership with the Silers.

The Newport Theatre disappeared from the listings of the Newport Balboa New-Times, where is had been a regular advertiser, after August 21, 1941. The 1940 and 1945Film Daily Yearbook listings show it as closed. The Old Spaghetti Factory has occupied the building for many years.