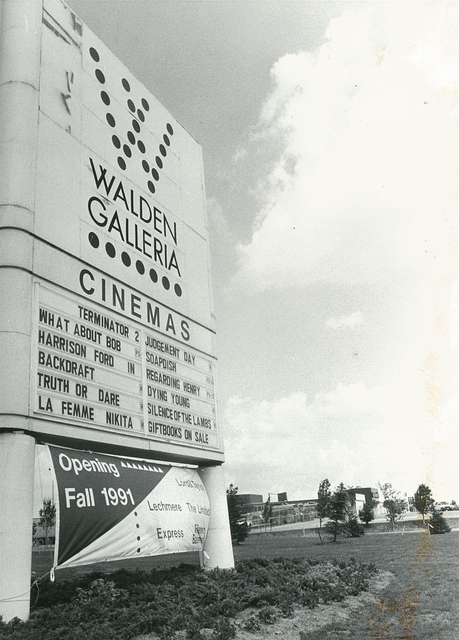 Hoyts Cinemas opened the Walden Galleria 12 in May of 1989 as the entertainment anchor to the then new Walden Galleria Mall in Buffalo. Hoyts ran the complex for only one year, when the company decided that they could not program a theatre that far away from their home office in Boston (despite being well under away with construction of a theatre just 120 miles closer at the Galleria’s sister mall in Syracuse) and put the complex up for sale.

Inexplicably General Cinema bought the complex despite already having an eight-screen theatre just one mile away at the nearby Thruway Mall. GCC equipped the theatre with their trademark “Cinema” auditorium identification signage and the cleberity autographed picture wall and ran the theatre until the company’s bankrupcy in 2002, when the theatre began operations under AMC Theatres.

Despite the fact that the mall actually attempted to evict AMC in 2003 to convert the theatre into a Best Buy the company continued to operate the complex until November of 2005, when the allowed mall owner The Pyramid Companies to buy out their lease. The theatre closed and reopened a mere four days later under the direction of the Regal Entertainment Group. Regal ran the theatre through June of 2006, when Pyramid announced a massive makeover of the mall which included the conversion of the complex into a Barnes and Noble bookstore and the construction of a sixteen-screen replacement theatre in space formally occupied by mall anchor Bon-Ton.

Contributed by Brett B.
Get Movie Tickets & Showtimes

Not sure, was there as early as October 19th and the mall still very prominately feature the theatre as “coming soon” to the second floor space originally planned for it. I read recently that the 13 screen theatre that Regal has under construction at Colonie Center in Albany had its opening pushed back from December to February in order to allow crews to complete construction on time, and from what I’ve seen this theatre appeared to be well ahead of the Galleria in terms of completion (as crews were just completing enclosing the second floor of the Galleria’s expansion in mid-October). I’m thinking you might be looking at March or April of 2008 at this point.

The Walden Galleria has updated their website with a May 2008 opening for this theatre’s replacement complex.

Although it looked like there was very little chance that crews would be able to make the mall’s May 2008 opening date for the replacement theatre the last time I was at the Galleria (March 30th), the theatre was listed on Fandango earlier today- which makes me believe that they at least think that they can make May (possibly something like Memorial Day weekend). Keep in mind however the theatre Regal has (or had, as they appear to be near opening there as well) under construction in Albany (which is an upper floor build similar to this theatre) has been delayed nearly six months due to numerous construction and equipment issues.

I was close on Memorial Day…. Regal has announced a May 22 opening for this theatre’s replacement complex. Presumably crews would then move on to starting the Barnes and Noble location that is still waiting to be constructed on the site of where this theatre once was.

Did the original ever have stadium seating, I’ve seen it listed a few places as Walden Galleria Stadium 12? If so which operator retrofit it? If not CinemaTour is wrong.

AMC would have also spent money by now to fix their aged cinema in Amherst. (I haven’t been there in a few years, so maybe they have.) And when Regal took it over, I think that’s when they decided to tear down and rebuild. I was out of the area for a while, and when I was in town, I went to the Quaker Crossing as it was closer, and had stadium seating. Still do, in fact, but last flick I was was at Galleria.

Cinema was built before the stadium craze. Last movie I saw there was 12/31/99 when it was General Cinemas. It was not stadium then. I suspect Cinema Tour is wrong. They even have a photo of a room there, and it didn’t have stadium seating. While money could have been dumped into the place, I doubt it.

CinemaTour has it listed as Walden Galleria Stadium 12 because Regal operated the complex under that name (despite the theatre’s lack of stadium seating). Regal never replaced any of the theatre’s interior or exterior signage after taking it over so I’m thinking that they worked out a deal with Pyramid for the new complex after, given either the option to leave entirely or remain with the mall as an anchor to the expansion, AMC decided to leave (which would make sense given the fact that they have shown little to no support for the Buffalo market and had a very poor relationship with Pyramid).

Thanks – I also assume Hoyts had a solid relationship with Pyramid as they were operators at their other malls but retreated from here. Regal picked up those locations and interestingly enough they won back this former Hoyts site. I guess I can’t fault Regal for the name, I sat in a slopped seating theater this weekend Rave bought from National Amusements and saw the pre-show slide reveal “Rave: The Ultimate Stadium Theaters” um no – they just bought some high quality non-stadium theaters, they need to change their marketing and deal with it.

As Paul mentioned, AMC of coarse still has Maple Ridge which is always clean and well run but a bit of a mystery: this type of 80’s era AMC were closed years ago, it’s rare to find AMC still running a theater that looks like this (it’s atmosphere is similar to Morristown, NJ’s Headquarters 10 which is now run by local chain Clearview Cinemas).

I’m not sure what AMC’s long term goals are in Buffalo, while Maple Ridge has a 3-D projector which would indicate a sign of confidence and long term stability (there are other AMCs that don’t have one) they also are now doing “weekday escape” pricing – all shows are $4.50, which might have other indications. I suppose it still does alright.

I secretly hope AMC allows it’s lease to expire and Dipson takes over Maple Ridge. Then again there is the possibility that one of the two theaters Regal is going to trade to AMC (as a result of the Kerasotes deal) could be in the Buffalo region (I’m thinking Elmwood or Niagara Falls), it certainly would avoid any DOJ conflict.