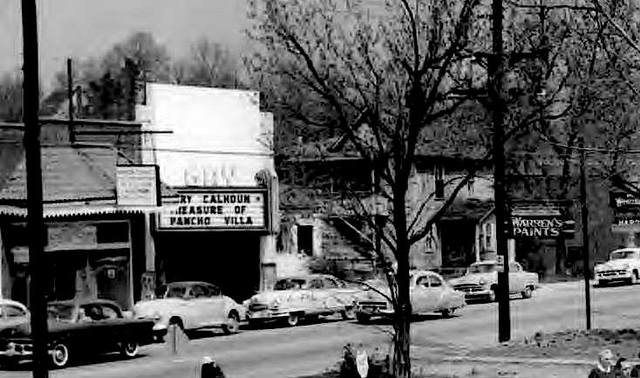 Originally opened as the Rivoli Theatre, this later became the Burlington Theatre, and on August 17, 1931 had been renamed the Gay Theatre.

At some point in the late 50’s/early 60’s the Gay was turned into a bowling alley. My brother was a pin-setter there when he was in his early teens. One day while rummaging around back,my younger brother and I found the old wooden frames that once held the posters and lobby cards out front. WE took what we could carry home and had some fun playing theater.
I miss Burlington. It was a thriving place when I was young. It is an overlooked gem that has been largly forgotten by Knoxville’s past two millionaire mayors,because it is East,not West. A smart developer could do wonders with it today.
By the way,Bob,,the IGA was Cox & Wright’s…operated by Jack Cox and Fred Wright,two of the finest men who ever lived. If not for their kindness, I,as a baby,would have gone hungry many times. They didn’t give credit,but Jack would always let mu mom have formula and stuff for us kids til payday.
There is still a Cox& Wright in Rutledge Tn,still owned by the family as far as I know. Come to think of it,Burlington had more than its fair share of good men..Blaine Farmer at the hardware store, Dr Greenlee at the drug store…Mr Keaton (Jewelry store) Mr and Mrs Pass ( dime store)…there were no bad people in Burlington in those days.
You can take the boy out of Burlington,but you can’t take Burlington out of the Boy.

I have a few photos of the exterior of the theater from 1994 – Will post one when that part of the site allows. Anyone want copy email me. ,,,Another Burlington Boy… The Gay was a machine shop in its last days – at least the back part.

Bob, the link doesn’t work – at least for me. Can you check your end?

The whole RESTORE KNOXVILLE website seems to be down. Hopefully it’s just temporary. I’ll let you know when and if it comes back up.

I have a KNOXVILLE Newspaper Sept 24 1967,Movie ads No GAY THEATRE listed so it was Closed then.If tthat even helps.

Below are the photos of the Gay Theatre in 1956 and then 1994 noted above. The original links both appear to be broken:

Sentimental and beautiful recollections, JohnBanner above. I feel that way about my neck of the woods in NJ. It’s wonderful that we can recall all those names from yesteryear – and they were so important at the time of our lives. People were more respectful with each other back then. They were golden times but we did not know it.