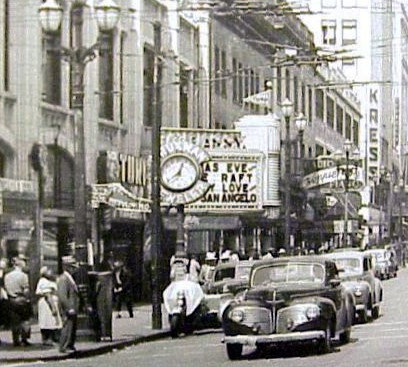 This theatre fascinated me as a child because it had two seperate entrances; one on 3rd Avenue and one on Union Street. Little did I know it was a down and out palace showing way past their prime movies to whoever would gather up the 50 cents and stagger in.

My first trip inside consisted of two horrible oaters and “And God Created Woman”. I sat through the Westerns twice just to get another look at Ms. Bardot.

It is now used as a nightclub.

The Embassy has not been demolished. Instead, the theater has been restored as The Triple Door, a nightclub mostly featuring jazz acts. The interior has been restored, leaving the original details on the walls and ceiling. All of the seating has been replaced with tiered seating featuring tables.

Above the theatre is the Wild Ginger restaurant, located in space formerly occupied by a drug store. This space was never a theater. Both the Triple Door and Wild Ginger are owned by the same person and are wildly popular.

The Triple Door website includes a short history (which includes photos) of the Embassy Theatre. Here’s the link: http://www.thetripledoor.net/Our-Story/Read-Our-Story.aspx

There might have been a fire, but it was bomb that went off in 1984 that resulted in seats being roped off. The bomb was put there by a group called The Order. They were a white supremacist group. Their idea was that all the cops would go the Embassy for bomb, while they were robbing a Brinks Truck north of there.

Do you have a current address for Doug Stewart? I’d like to write him a letter.

Sorry, Dennis. I don’t have any contact info for Doug.