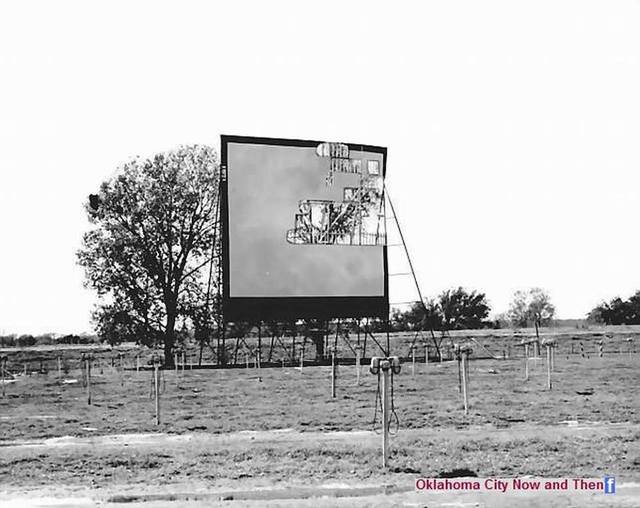 Was it by the Lake Mike?

This link labels this as Lakeside, but these are actually images of the once lovely Lake Air Drive-In, OKC.
http://www.roadsideoklahoma.com/node/26

Shown on this informative link are recent snapshots of the former LakeAire Drive-In Theatre …
http://www.abandonedok.com/lakeaire-drive-in/

The May 19, 1951 Daily Oklahoman reported a recent storm that “tore up the screen of the Lake Air drive-in theater on the site of the old Lakeside golf course.”

The Okie Mod Squad web site has a couple of photos of the ruins, posted in August 2018, as well as more notes about the Lake Air.

The site says the golf range morphed into the drive-in in 1950. “According to one expert, ‘It was built by Robert and Charles Mc Farland and sold to local theater magnet, Robert Lewis Barton in 1959.’ … The drive-in closed after the 1967 season and became a go-cart track then a golf range again and maybe even a church before being abandoned altogether in the early 2000s.”

The projection booth/concession stand that is shown in the photos and appears in a 2015 Google Street View appears to have been demolished from the latest overhead Google Map view.

Motion Picture Herald, April 29, 1950: “The city’s newest drive-in theatre, Lake-Air, at the old Lakeside golf course, opened last Tuesday with “Francis” on the screen. Built and to be operated by R. E. and C. B. McFarland, it is one of the three drive-ins to have its projection booth at the rear of a 600-car lot instead of in the center of the parking area.” 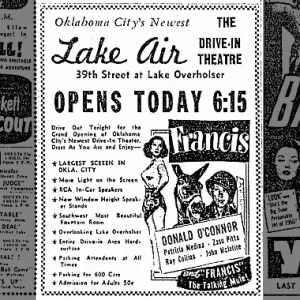