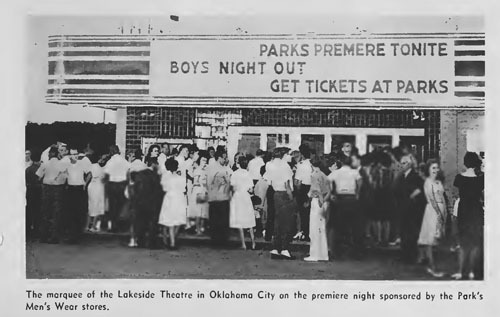 Glad I could be of some help!

My grandparents built this theater and opened it in 1949 when there was nothing between it and Lake Hefner. My grandmother, Elizabeth Newcomb, said the only other business on North May was a hamburger stand a few blocks away. I guess that became the A&W a block or two north.

Grandmother was a presence at the Lakeside until her health began to fail in the 1970s. It was the cornerstone of Newcomb Theaters Inc, which included the Trend at 1214 North Pennsylvania, and the Cooper at 19 North Robinson (subleased from the Cooper Foundation).

My grandfather, Leonard Newcomb, was a dentist and built the Lakeside with his dental office upstairs. A door on the north side of the building opened on a stairway which went up to the dental office waiting room.

On Saturdays when I was a kid my grandfather would work in the dental office until noon, then he and his dental assistant would go downstairs to open “the show” at one. He married that dental assistant in 1991 at the age of 90 long after my grandmother and her husband had died.

Tower Records was relatively late in the building’s life. When my family sold it in 1977 it became a Sound Warehouse.

Modern shots of the former Lakeside Theater can be viewed here,
http://www.roadsideoklahoma.com/node/534

Windows were cut into auditorium walls when this building was converted into a popular record store. Here is a fine shot of what the old Lakeside Theatre looks like today,
View link

As a kid, I spent many happy Saturday’s at the Lakeside. Get there in the morning and stay all day, watching cartoons, movies, Disney nature documentaries, and whatever else happened to be showing, which was a lot. The place was packed with kids (6-12 was about the normal range of ages, I think), every Saturday and NO parents! No way that could happen today. It was fun, and I don’t think that I ever saw any fighting or bullying, just a huge bunch of kids having fun and enjoying themselves immensely. 77DX, I think that I remember your grandparents, and they treated every kid just like a grandchild of their own. I believe that they both simply loved kids beyond measure. And they seemed to know every kid by name. Those are wonderful memories for me and I cherish them.

Sound Warehouse was the big music chain in the area in late 20th century. I purchased many records and CD’s at this location before they closed. I don’t ever remember a Tower records here or anywhere else in OKC. the name changed at some point to Wherehouse before going out of business,other locations now owned by FYE. picture above is current occupant, Blue Seven.

Saw Hitchcock’s “The Birds” at a private screening at the Lakeside in 1963 for theater operator’s. Film Row’s Screening room’s were not large enough to accomodate the growing number of prospective bidder’s and screenings were utilized in and out of hours of various theater’s from time to time. The Birds became a huge hit in 1963 with record earnings.

Uploaded Pic of Marquee in 1962 with misspelled word. View in Photo Section.

Despite what is offered for the closing date in the initial information about this theatre, The last ad found was on 26 Aug 1977. showing, “Crater lake monster” and “Land of the Minotaur.” This comports with the information provided by 77DX, that the owners of the building sold it in 1977.