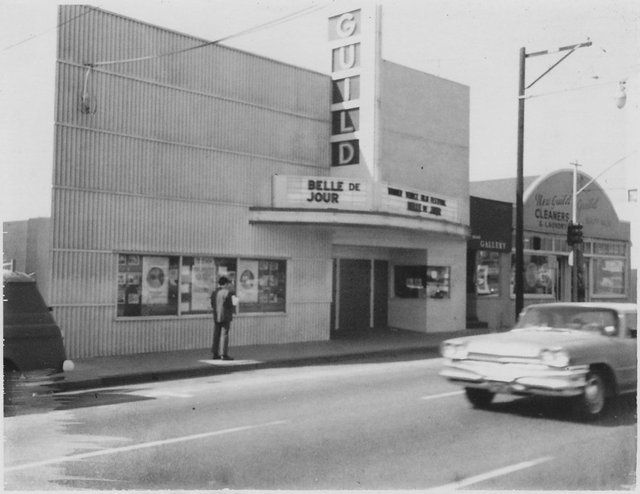 Built as the Menlo Theatre in 1926, it is a short drive north of the Stanford Shopping Center and nestled right next to downtown Menlo Park. Originally built as a burlesque house and converted to exhibit movies in the 1940’s, it is the oldest standing theatre on the San Francisco Peninsula, featuring two giant golden wings on either side of its gloriously large screen. Operated by Landmark Theatres since 1989, the Guild Theatre featured the finest in independent film and foreign language cinema. It was closed on September 26, 2019 and was demolished in 2020.

Oh Guild. How do I love thee. You are quite simply my favorite theatre to see any movie that I know will mean something special to me. All Ambout My Mother, Huit Femmes, Enigma, Kolya, Gosford Park, Talk To Her, Billy’s Hollywood Screen Kiss, Wilde, A Prarie Home Companion. I can sit back and stare at your comfortable screens and stay warm in the Winter and cool in the Summer. Your staff treat me with a familiar manner that sometimes we fight, other times they alone are worth the price of admission. Your marquee glows pink against the El Camino back drop to let us all know to stop and say hi sometime.

The interior of the Guild is structurally plain, but there are numerous things to delight the eye. The tiny lobby is decorated in a kind of funky artiness that’s hard to describe, as though someone went to a craft store, bought various decorative moldings and trimmings and had lots of fun. This beats the previous look, which dated from the Sixties or early Seventies, where both the lobby and auditorium were black and orange. For many years since though, the auditorium has featured some nice fixtures and ornamental details slavaged from other classic theatres. I’m quite sure the two moderne ceiling fixtures are from the Uptown, San Francisco. The wall sconces are also moderne, but I don’t know where they’re from. A gilded wave motif wainscot and some large scroll/floral flourishes at the front and rear of the auditorium come from some Fox house and date from the Skouras era, and are identical to portions of the intact Skouras decor in the Redwood City Fox and the California in Berkeley, among others.

A black and white photo taken in the 40s of the Guild’s interior shows modest moderne interpretations of classical themes in murals flanking the screen.

I recall reading or hearing that the Guild was originally built in the Twenties, and had its facade lopped off and rebuilt when El Camino Real was widened. Guild was not the theatre’s original name. It MAY have been the Menlo Park at first, though I shouldn’t be quoted on this. Obviously, this would have been before the Park on El Camino, or the Menlo, on Santa Cruz Avenue, were opened.

This piece confirms GaryParks' points about the interior details not being original, and that it wasn’t originally named the Guild (was just the “Menlo Theatre.”

Theatres of the San Francisco Peninsula, by Gary Lee Parks and Jack Tillmany, says that the Menlo Theatre was originally opened in 1923 and later rebuilt as the New Menlo Theatre.

The January 5, 1943, issue of The Film Daily ran an item about the partial demolition of the Menlo Theatre and its rebuilding as the Guild, necessitated by the widening of El Camino Real:

“Well, Half a House Is Better Than None

“Menlo Park, Calif.— Phrase, ‘half a house,’ has taken on a unique meaning here. To effect a public improvement, a new highway has been constructed. But to build the road necessitated cutting away half of the local Menlo Theater. Work is now completed, and the house has only half its original seating capacity, it’s operated by the Harvey Amusement Co.”Harvey Amusement had taken over the Menlo Theatre in 1936, as reported in the May 6 issue of The Film Daily.

Interesting story in today’s SF Chronicle about a woman on a mission to save the Guild preemptively. The theater is still open w/Landmark running it on a month to month lease but “just in case"…. I believe this is the last or one of the last single screen theaters between San Francisco and San Jose along or just off of El Camino Real, the 50 mile main drag of the Peninsula.

An evening screening tonight will be the last for the Guild. The building has been sold to three investors — Drew Dunlevie, Pete Briger and Thomas Layton, all Peninsula residents — who plan to demolish the theater and rebuild it as a music hall, ending the movie house’s 93-year run in Menlo Park. Details here:

The building was demolished as of 2020.

The December 27, 1924 issue of Moving Picture World said that architect Birge M. Clark was drawing plans for a 500-seat movie theater to be built at Menlo Park. I don’t know that this project was in fact the Menlo Theatre, but it might have been. It isn’t listed in the guide to Clark’s architectural records and personal papers, which are held by the Stanford University Library, but those records are incomplete. The papers do include material, including a façade drawing, relating to the Varsity Theatre in Palo Alto, which was designed by Reid Brothers in 1927. It’s possible that Clark, who was local, acted as a supervising architect for that project.