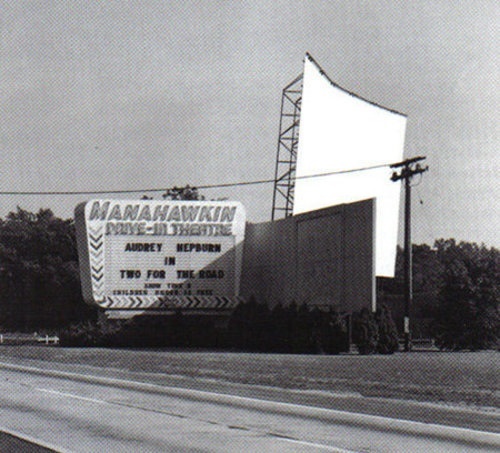 Attached link puts the theater in operation from at least 1963 through 1976.

In 1970, I helped clean up the concession stand after a fire. I worked for Berlo Vending CO. The theatre was stiloled owned by Shapiro. The district manager, Jimmy McHugh was there. The film on the marquee was The Hawaiian’s. The booth had RCA/Century projectors.

In 1974, when THE FRANKS owned it, a streaker ran through the snack bar.

The theater was active until I was about 5 or six, possible longer, so it was still open around 1980/81.

The address (at least for Google) is 205 New Jersey 72, Manahawkin, NJ. Currently, a Kohl’s and Bed, Bath, and Beyond sits on the property with no trace of the drive-in remaining. http://tinyurl.com/jsaq49r

More of a novelty than anything, this was one of very few Fly-In Drive-Ins to be built.

After a closer look at the 1963 aerial photo, the Fly-In Drive-In #2 had it’s own screen and parking area closer to the runway. The landing strip may have been able to serve both drive-ins, as they were less than half a mile away from each other. It’s hard to tell if both drive-ins were operating simultaneously, so more research will need to be done on a local level.

It had a curved screen! Don’t see that at drive-ins very often.