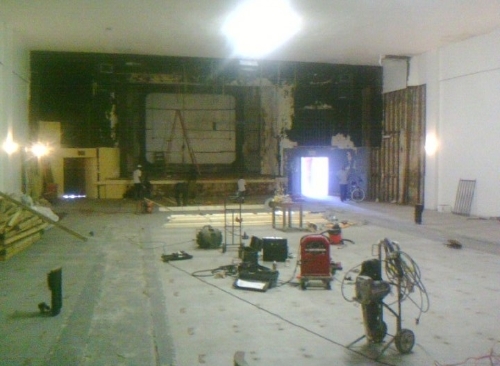 The original name of this theatre was the Strand Theatre when it opened on September 18, 1915 with Viola Allen in “The White Sister”. In 1926 it became the 7th Avenue Theatre. In 1938 it was remodeled to the plans of architect Robert E. Collins reopening on November 23, 1938, reverted back to the Strand Theatre name when it was taken over by Wometco Theatres and reopened with The Ritz Brothers in “Straight Place and Show”.

On July 2, 1968 it was renamed Strand Art Theatre, an adult theatre, and then it was called the Sun-Sun Theatre, which I believe showed martial arts movies, followed by the Shanghai Theatre name. For a short period prior to closing, it reverted back to the Strand Theatre name. The theatre is now used a church.

This theatre was the typical theatre seen in Miami throughout the 1950’s and 1960’s. The entrance of the Strand Theatre looked a lot like the old Town Theatre in downtown Miami. On the outside neon lights decorated the theatre marquee, and dead center were the words “Always 2 Features”.

The Strand was never Teatro Nacional. The name rings a bell, but it’s exact location, I don’t know. I know Teatro Marti was around in those days. A lot of small theatre’s were an on off thing in Miami back in the mid 70’s to early 80’s.

Good work on your part with the brewery. Too bad the look and feel of a places such as the Strand Theater could not be preserved by new business' when they take it over. Or leave it as is if possible. I went for a while to the Essex Theater in Hialeah near Miami Springs as a kid. A few years ago on a business trip to Miami I drove by it and went inside during a Christian service on a Friday night and the interior looked very much the same. I sat down for a few minutes in the back during the service and just enjoyed taking in the sight. It was fun to look over the size and spacing of the room, ceiling, walls and stage, as I was only a kid then and everything seemed bigger. I will continue to see if I can find a source listing the films shown in Miami during that period, I would really enjoy slowly perusing over that list while enjoying a bag of popcorn and soda!

The idea of putting a brewery in the old theater is to restore the original marquee, screen, and instead of a stage, 100 taps! Then fill the auditorium with tables, and restore the concession stand to sell finger food. Hell you can even play movies on the old screen if you want. I guess a Twist to an old theater, while preserving it’s charm would have been a good idea. LOL!!! Not sure if they took the bite or not, but it was well worth giving it a shot. The Strand is the only place left from the silent film era that is still standing, with the exception of the Olympia, the rest are all either malls, stores, or who knows what. I think the Strand is worth preserving.

Reopened on November 23rd, 1938 along with the reopening of the Paramount the next day. Grand opening ad posted. The Strand theatre that opened on September 18th, 1915 and closed in 1923 may have been in another location, but the newspapers did not gave the address.

That older Strand was on Flagler Street and Miami Avenue.

Older Strand ad removed, Thanks, Al. I will be making a new entry for that theatre.

It reopened as the Strand-Art on July 2nd, 1968. Grand opening ad uploaded.

Add the Sun Sun Theatre to the also known as. That name change occurred on July 25, 1975 as the Sun Sun showed chopsocky films. The venue was then added by the operators of the Star Mall Twin and the Miller Road 93 as the Sun-Sun Cinema later in the year. The Sun-Sun sunsunset on July 29, 1976 at the expiry of a year over year sublease with David Chiang in “The Tong Father,” SuperChan - Kung Fu King in “Forced to Fight,” and Michael Wai-Man Chan in “Chinese Mack.” They didn’t go half way at the Sun-Sun.