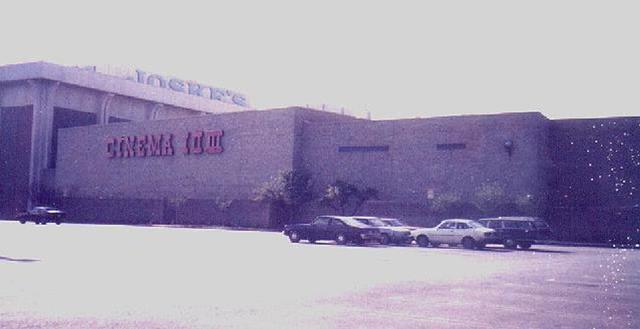 The North Star Cinema was the first multiplex built in San Antonio. It opened on Christmas Day 1964. Cinema I had 958 seats and Cinema II had 526 seats. “The Sound of Music” had an 88 week run there, a still unbroken record!

I got my first job as an usher there in 1968. On the day I started Cinema II was running “2001: A Space Odyssey” in 70mm. It was the last 70mm film that North Star Cinema ran. The biggest hits always seemed to play on North Star Cinema’s screens.

On October 19, 1979, Cinema I’s auditorium was split into two auditoriums. It was a poor job, and the charm the theatre once had was lost forever. It closed in 1982.

I had just moved to this side of town when this theater was on it’s last days. I saw FIREFOX and SUPERMAN II at this theater. It was nothing spectacular just nice memories.

It was 50 years ago today that “The Sound of Music” premiered at the North Star Mall. With a reserved-seat run of 82 weeks, it’s almost certainly the long-run record holder for this venue. (Anyone know of something that ran longer?)

I was the second manager of the NorthStar. The first, longtime and legendary manager was Mr. Ted Waggoner. (Ted insisted on being addressed as “Mr.”) Ted ruled his house with an iron fist. No one, including customers, dared challenge his authority. A projectionist told me of a night when Ted didn’t take kindly to the behavior of a particular customer. He ordered the film stopped and the house lights brought up. Ted marched down to the front of the auditorium and announced who he was and that he ruled the theatre and if anyone didn’t like it, they could leave. Half the audience got up and left!

During my tenure, I had the opportunity to screen “The Sting” for George Roy Hill, Robert Redford and the essential crew of “The Great Waldo Pepper.” They were in San Antonio filming “Pepper.” “The Sting” – which had not been released yet – had just been completed and Hill, et al had not yet seen the released version. So, they came in on a Saturday morning before opening for a screening.

After a couple of years, I was moved on to open the Greenspoint Five in Houston – GCC’s first five screen theatre. It was an abomination of a theatre! Five center aisle shoebox sized auditoriums lined up in a dead-end hall. First new theatre in NW Houston and, despite being an awful place to watch a movie, was packed every weekend, pretty much regardless of what was showing! Those were boom days in Houston!

I was just in North Star Mall today and based on the current configuration I couldn’t remember where the theaters were. What stores now occupy the spot of the theaters? Anyone>

Ram9214: I just reset the Google street view to what I believe was the location of the North Star Cinema, judging from the vintage photo uploaded by elmorovivo. The building occupied by Joske’s in the photo now houses a branch of Dillard’s. The center’s map on its web site shows several small shops flanking the new mall entrance (which can be seen in street view) that has been punched through the theater space. The stores displacing the theater include Lens Crafters, Pac Sun, Journeys, Gurinsky’s Jewelers, Justice, and Urban Cowboy.