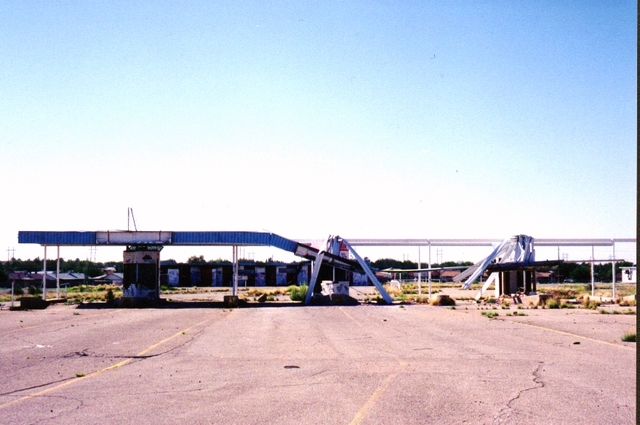 The 3-screen Cinema Park Drive-In was opened May 7, 1969, it was located on Montana Avenue in El Paso’s east side. When built there was a central projection room atop the snack bar. The snack bar and booths caught fire, and three separate projection rooms were built out on the individual lots, and the snack bar was rebuilt in it’s original location. It was owned by McLendon Theatres of Dallas, and later leased to FLW Theatres. It’s last operator was legendary showman Bob Hartgrove.

Unfortunately the snack bar caught fire again, and the landlord refused to rebuild. The drive in ran a year or so selling concessions out of a catering truck, but closed in 1994.

One of El Paso’s largest drive-in theater complexes, the Cinema Park, 10676 Montana Avenue, today was a rubble of blackened ruins after a fire destroyed it late Saturday doing an estimated $210,000 damage. Firemen were investigating the cause of the blaze.

Theater manager James Harris, said the theater would be reconstructed, but gave no dates as to when building would begin. A fireman, Lt. D.R. Guillen, was trapped inside the blazing structure a short while after he led firemen to fight the flames, then was caught inside by a falling, burning beam. Firefighters chopped an escape passage for him and he got out with burns that did not prevent his remaining to help knock out the blaze.

A janitor said he had left the building to empty some trash and when he returned found the fire already making good progress. It had engulfed most of the structure by the time firemen arrived.

Approx. address now is 10950 Montana Ave. The housing complex south of this address was where the theatres stood.

I have a few (very few sadly) pictures of the Cinema Park marquee and ticket booth (with the burnt up concession stand in the distance) from just before the place was bulldozed. If you’re interested please contact me. I also used to work at the Cinema Park for McLendon, FLW, and the “legendary” Bob Hartgrove (ooh boy!)

This opened on May 7th, 1969. Grand opening ad in the photo section.

Is it known how either of the two fires started?

Worked at this Drive In Theater part time when I was stationed at Biggs Army Airfield, Ft. Bliss, Texas in 1970-72.