The Theater Project at The Majestic Theater (Official) 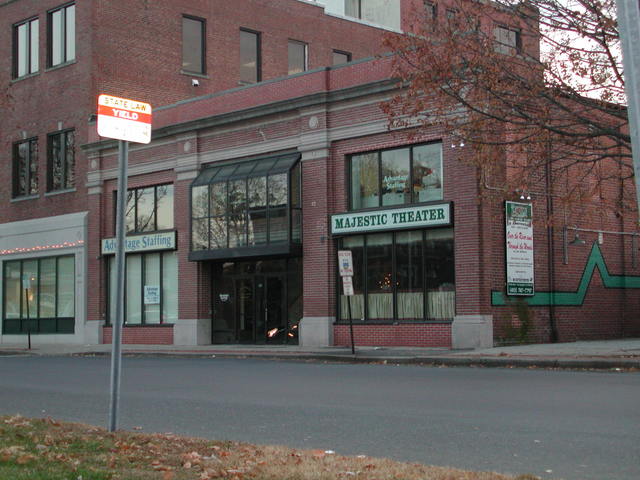 This former movie house in downtown West Springfield, Massachusetts became the home of live theater for The Theater Project at the Majestic Theater in 1996 under the direction of Danny Eaton.

When the Majestic was a movie theatre it seated 701 people.

The Majestic opened around 1922 and in the mid-‘60’s became the Paris Cinema with a new marquee and updated front exterior. Foreign and art films were shown here for many years.
Around 1984, it was renamed the Elm Cinema and showed family films.
It closed around 1988. A few years after, it’s marquee and entrance lobby was removed for lawyer’s offices that were built upstairs. The theater remained intact behind the offices until it was transformed into a stage theater by The Theater Project in 1996.
It returned to being called The Majestic and became a very successful live theater for West Springfield.

Theater was actually built in 1928 as the Elm Theater. A very well kept neighborhood second run movie house. The Majestic ran 2 features nightly. First one at 6:30, second at approximately 8:10 and first one again at 9:30. This gave patrons a choice of catching 2 movies early or 2 later. Other 2nd run theaters at the time scheduled their features at 7 & 9pm.

The interior had been renovated previously, curtains and pillars with modern fixtures – probably in the 1950s. It looks like they gutted and completely rebuilt the auditorium for its current use. Nice black box style layout now.