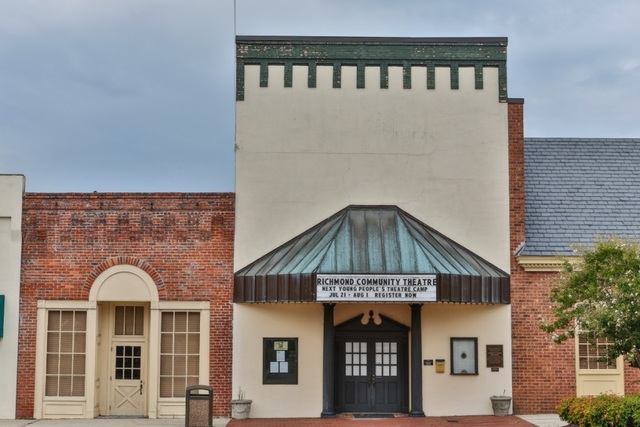 Little Joe’s Theatre was opened in August 1934. On August 24, 1939 it was renamed Strand Theatre. It was closed in 1975, when it was acquired during the late-1960’s by Charlotte based Eastern Federal (who also owned and operated the Richmond Plaza Cinema off Highway 74).

The establishment is still in operation as the Richmond Community Center.

It was formerly The Richmond Theatre which opened in 1930 with a seating capacity of 700 that was operated by Wilby-Kincey Theatres.
The Richmond was in business from 1930 until 1964. In 1964,the management changed the name to the Strand Theatre,which was still a 700 seat cinema which Wilby-Kincey operated until the late 1960’s when it was acquired by Charlotte based Eastern Federal Corporation.
The Strand closed in 1975. By the late 1990’s,the Strand was saved from destruction and was turned into a performing art house and live theater. Today,it is known as the Richmond Community Theater.

The Richmond Theatre was remodeled and enlarged in 1935, according to this item from the April 24 issue of Motion Picture Daily:

“Charlotte, N. C, April 23. — H. C. Wall is modernizing the Richmond at Rockingham, N. C. The seating capacity will be doubled to 855. New chairs will be installed and posts will be eliminated. The lobby is being widened from seven to 18 feet.”Mentions of the Richmond’s older rival, the Star Theatre, which had been in operation at least as early as 1917, soon vanished from the local newspaper. Henry C. Wall was still operating the Richmond in 1940, when another house (possibly the Star reopened and renamed) called the Strand was also in operation. That year, Wall opened a second house, called the Little Theatre, giving Rockingham three movie houses.

This Richmond County Historical Society publication has a completely different history and timeline. Halfway down in the link. Also I added an early `60s photo that has both Friendly Theatre and Strand on the building.

“On July 5, 1934, Joe Caudell announced plans for a new theatre to be located in the then Bob’s Cleaners building on Washington Square. The building was next to the Rockingham-Post Dispatch building, later Hough Hardware, now Kitchin, Neal, Webb, Webb and Futrell law offices.

On Aug. 24, 1939, that theatre was sold to H. B. Meiselman and renamed the Strand Theatre. He later donated the building to the City of Rockingham which is now the Richmond Community Theatre operated by a volunteer board of directors which produces plays and other events in the building."

Here is David Zornig’s link in clickable form. We have indeed been conflating two different theaters, and apparently we’re not the only ones. The University of North Carolina’s database of architects and builders says that the Rockingham Opera House “…is probably….” the current Richmond Community Theatre, but if the Richmond County Historical Society page David Zornig linked to is correct (and it probably is), it wasn’t.

The 1935 Film Daily Yearbook does list a 400-seat house called Joe’s Theatre for the first time. The 500-seat Richmond Theatre is still listed as well. The house is listed as Joe’s Theatre through 1938. I don’t have the 1939 FDY, but the 1940 edition lists the Strand instead of Joe’s. The 1940 edition also lists the Richmond, and the Little Theatre, no capacity given, and a house called the Hanna Picket, with 300 seats. Rockingham’s leading employer then was a textile company called Hannah Pickett Mills, and I suspect that the Hanna Picket Theatre was operated by that company for its employee

A plaque on the Richmond Community Theatre says that Herman and Claire Meiselman operated the Strand Theatre from 1939 until December 17, 1976, at which time their family donated the building to the city.

The link in my previous comment is broken, so I’ll try it again and delete if I can’t get it to work: Historical Society article.