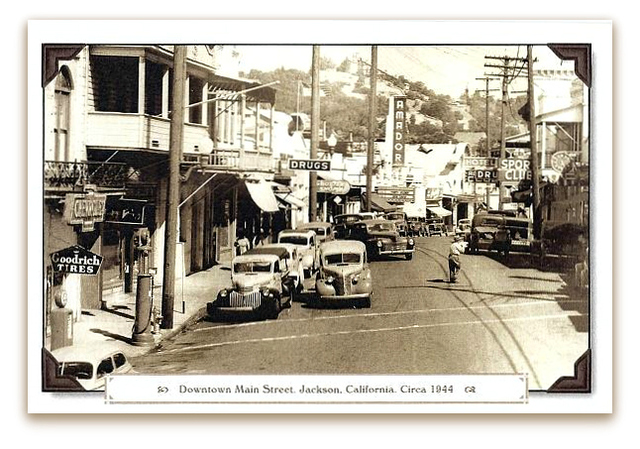 Opened in 1939, the Amador Theatre in Jackson is shown in the 1945 Film Daily Yearbook as being in operation. The same Yearbook also shows another theater in Jackson, the closed, 500-seat Jackson Theatre. Any information on this theater would be appreciated.

It seems like Jackson’s other theatre the 500 seat capacity Jackson Theatre was closed for quite some time, as it is also listed as ‘Closed’ in Film Daily Yearbook’s;1941 and 1943 editions.

Well I know for sure that the Amador Theatre had an address of 758 Main Street, Jackson, CA. Looking at a map, Jackson looks like it could be a one street town, especially back in the 1930’s. So I would say it’s a toss-up between the Amador and the Jackson as to which was the Ratto Theatre. Hopefully a local will give us the answer.

Here is a photo of the Amador:
http://tinyurl.com/rpcvq

The Jackson Ratto Theater was located at 149 Main Street (this from a 2006 report on pollution hazards which lists its location as having a leaking underground storage tank.) A small photo of the Jackson Ratto in the 1930’s appears on this page. The building in the photo does not resemble the Amador Theatre in the photo to which ken mc linked just above.

Here is the owner of the Jackson theater in the 1930s:

Andrew L. Pierovich, one of the able and successful members of the Amador county bar, is the present city attorney of Jackson, and is honoring his county by his splendid professional service. He was born in Jackson, June 22, 1895, a son of Andrew and Kate (Glavich) Pierovich. The father was a seafaring man, who came around the Horn to California and in the early â€˜70s came to Jackson, Amador county. For a number of years he engaged in mining and then turned his attention to the hotel business, which he followed successfully until his death, in 1919. His widow is still living in Jackson. They became the parents of two sons and three daughters, but one daughter is now deceased.

Andrew L. Pierovich attended the public and high schools of his native community and then entered St. Maryâ€™s College, at San Francisco, from which he was graduated with the degree of Bachelor of Arts in 1917. During the World war he joined the United States Navy, in which he served for eighteen months. At the close of the war he was honorably discharged and returned home, and for a while had charge of his fatherâ€™s business after the latterâ€™s death. He then entered the law school of the University of California and won the degree of Bachelor of Laws in 1922. Admitted to the bar, he practiced his profession in San Francisco until 1926, when he returned to Jackson and has since been engaged in practice here, though still maintaining his office connections in San Francisco. He is an able, successful and dependable attorney and is serving as city attorney of Jackson.

Politically Mr. Pierovich is a democrat and is interested in everything that concerns the prosperity and advancement of his community. He belongs to the Fraternal Order of Eagles, the Knights of Columbus (third degree), the American Legion and the Native Sons of the Golden West. He is very fond of the mountains, and fishing and hunting are his favorite forms of recreation. He has prospered in his individual affairs and he and a partner own the Jackson theater, a modern and well equipped motion picture house, in which are presented the latest talking pictures. He is known as a man of progressive ideas and in civic affairs is a leader, giving freely of his time and efforts for the welfare of the community in which he lives. He commands a large law practice and is numbered among Amador countyâ€™s representative citizens.

Guido Deiro played at the Amador in 1938. Everybody flick your lighters:
http://guidodeiro.com/teacher.html

Guido’s link has gone to internet heaven. Too bad.

I did not know that. Thanks for rescuscitating him.