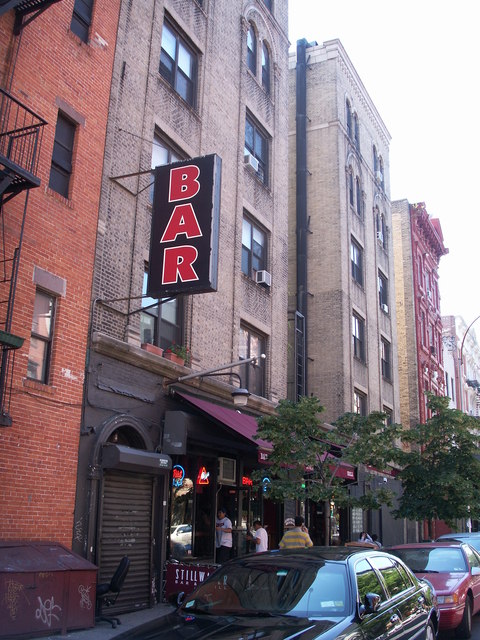 Located in the basement of the building on the southwest corner of 2nd Avenue and E. 4th Street in the East Village, entrance is via a non-descript ‘discreet’ doorway (on E. 4th Street) which during the daytime when closed has a roller shutter over it. Descending a flight of stairs down to the cinema, there are movie posters in frames (although these are not usually the movie being screened inside!).

The basement was first given a Certificate of Occupancy on October 22, 1927:Cellar-Persons Accommodated 150-Restaurant, cabaret & storage. Originally named Rainbow Inn. In 1954 it became a gay ‘drag’ and dance bar named ‘Club 82’. The drag shows moved out and Club 82 became a rock music venue from 1972. It featured bands such as Another Pretty Face and The New York Dolls. In 1978 it became the Film Forum, screening independent movies. It later became an all-male strip club. In 1990 it became a live music venue named Woody’s, operated by Ron Wood, but this failed and closed within months. It reopened as the Bijou Cinema in around 1992, operated by the owners of the (now closed/demolished Bijou Cinema ex-Jewel/Comet, etc, at 100 3rd Avenue).

The Bijou Cinema re-opened in January 2006 after it had closed in 2005 for a complete re-fit and renovation, with new décor, seating and lounge areas. It operated daily from early in the evening until around 5:00 AM in the mornings. Seating in the main auditorium is in comfortable new theatre style seats and the movies screened (via DVD digital projection) tended to be a mix of art house and fairly new ‘mainstream’ releases, with occasional ‘fill-ins’ of camp TV comedy shows such as ‘Little Britain’ or pop promo videos. I saw a couple of Japanese sub-titled movies and the latest “Star Wars” movie on recent visits.

Taking all aspects into consideration, this was a clean and well run establishment catering to a gay male clientele. It was closed in late-December 2007 due to flooding, but this was only temporary. It had re-opened by July 2008 and continued in 2013. The operating hours are 9pm until 4am. It had closed in April 2019 and when I visited the cinema in July 2019 I saw it was being gutted. It has reopened as a bar named Nitecap.

Well if nothing else, I’m glad my question started some digging around on this theater’s history. Funny… I just recently watched a very entertaining TMC documentary about Erroll Flynn. No mention of his pre-Tommy Lee antics with the 82 Club piano!

Does anyone know if this theater is still around?

It was in November of this year, I went there, and it was indeed a nice space. I’ve heard that it has been recently closed due to flooding (it’s a basement). Would like to know more, as I had thought it would become a hangout for me.

Opening post is confusing, indicating this ‘Bijou’ was open at this location at the same time the Bijou which was on 3rd Avenue for a good many years between 12th and 13th (I believe). Says owned by same people, but I knew about the 3rd Avenue one during the 80s and 90s, not about this one. Thanks

Does anyone have the phone number for this place and also are they still open?

No phone number and it is still closed.

For sure, it is open at this date (July 11, 2008)
I have been there a couple and now is looking more neat and cleaner after certain renovations.

has any body bin by latly

The First Film Forum was at 256 west 88th Street. I am not sure when they had screenings here although I do not doubt they probably did.

Thanks. I guess no more adult cinemas in the city. Giuliani really messed it up for all of us.