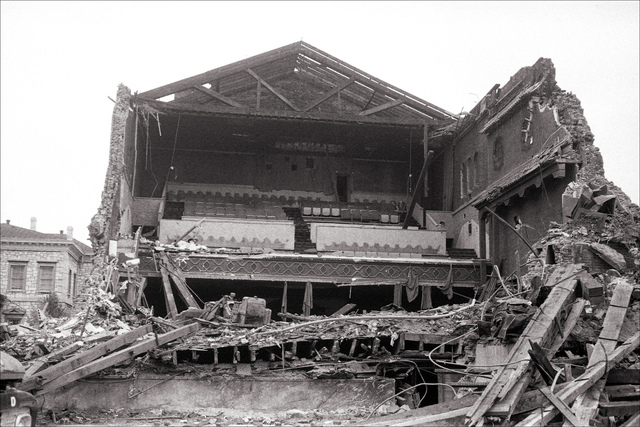 Built in 1883 as the Frankfort Opera House. It was open in 1971 was I was projectionist. Last known movies shown included “The Godfather”, “Billy Jack”, “Bedknobs and Broomsticks”, “Pocket Money”, and “Summer of ‘42”.

This theater on Main Street was open in 1916. Obviously no way to tell if this was the Capitol or some other theater.
http://tinyurl.com/2hkwcl

The Capitol was a Chakeres theater in 1970. It doesn’t look like it was open for too long after that.

It was actually located on the odd side of the 200 block of West Main St. When they tore it down they rebuilt a building there which is now the Dept. of Insurance located at 215 West main St.

The address of the Capitol was actually 213 West Main Street. At one time the building was owned by the city of Frankfort. During the early years, City Hall was located on the second floor of the theatre. Built as an opra house, the theatre had a fly loft and large stage. Dressing rooms were located below the stage.

The Capitol Theatre was built in 1883 as the Frankfort Opera House, and was designed by none other than the noted Chicago theater architect Oscar Cobb. It was among the buildings listed in a 1971 survey of historic sites in Kentucky, prepared for the Kentucky Historical Commission.

The Frankfort Opera House and City Hall was also listed in an advertisement for Cobb’s firm that appeared in the 1884-1885 edition of Harry Miner’s American Dramatic Directory, and in an article about Cobb in a book about the Chicago Board of Trade published in 1885. Here, from the latter publication, is a list (probably not exhaustive) of theaters Cobb had designed up to that time:

The photo of Main St. in Frankfort had to be taken no earlier than 1946. The movie showing at the Capitol Theatre was “Tars and Spars” starring Janet Blair. That movie was released in January, 1946. It is sad that the Capitol Theatre was not saved. It was a historical building that should never have been demolished. At least the Grand Theatre was saved, but it was strictly a no frills theatre compared to the Capitol. The folks that saved the Grand need to be commended for their efforts. It really looks nice, and provides a wonderful entertainment venue for Frankfort.

This is not the Capitol Theatre in Frankfort, KY. It did not have a stone building sitting towards the back of it. It, along with the other buildings on the street, were all aligned along the edge of the sidewalk.

dredmon: The photo was taken from the stage end of the building, so the stone building in the background was not behind the theater but across the street from it. The stone building, First Federal Savings Bank of Frankfort, is still standing at the northeast corner of West Main and Lewis Streets.

The finding aid to the Frankel and Curtis architectural records at the University of Kentucky lists the following: “Remodeling project comprised of 49 pages of construction and record drawings, including elevations, sections, floor plans, details, schedules, and sizes of materials.” The records pertaining to the Capitol are dated 1929 and 1936. The Frankel and Curtis collection has not yet been digitized.