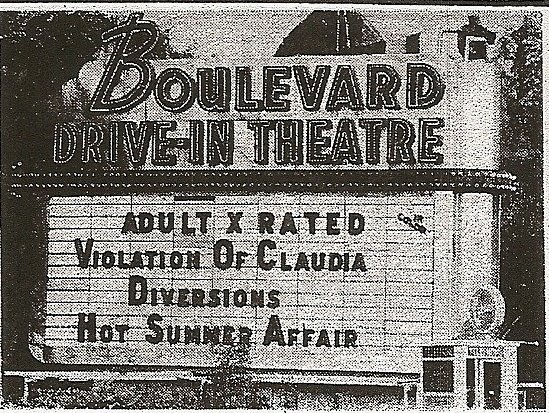 The Boulevard Drive-In was opened on December 24, 1948 with Red Skelton in Southern Yankee". The theatre was located on Biscayne Boulevard at 183rd Street. This area is now known as Aventura. It later went over to screening X-Rated adult movies.

Not to be confused with the Boulevard Theatre, later known as the Pussycat Theatre, which has its own page on Cinema Treasures.

Contributed by Louis of Pompano
Get Movie Tickets & Showtimes

The Golden Glades Drive-In did indeed have two screens; one on opposite ends of the property parallel to the Palmetto. My father used to take us there quite frequently. Saw MASH and Tora Tora Tora during that time. Later as a teenager I used to sneak into the drive-in frequently via the house adjacent to the property (had a friend who lived there). Saw The Omen, Lipstick, and Star Wars more times than I care to count during this time.

The property now sits on a self storage lot…

Have vague memories of the Boulevard Drive-In. Don’t think I ever saw a movie there…

A half-eaten hot dog that someone left behind during a
break-in at the concession stand of the Boulevard Drive-In , 14301 Biscayne Blvd., attracted a large scorpion that nearly stung a member of the theater’s cleaning crew Saturday, police said.

Police said someone entered the concession stand between 2 and 11 a.m. The intruder broke the locks on the refrigerator, freezer and cabinets but took nothing.

The burglars did eat several hot dogs that had been left out but dropped one on the floor, police said. That attracted the scorpion.

A similar break-in occurred at the theater two months ago, police said.

Who is stupid enough to leave a half-eaten hot dog in a crime scene? You’ll get caught easier that way.

That aerial shows the screen facing away from Biscayne Boulevard, allowing for x-rated material without too much controversy.

If it was still open today FIU might have something to say.

The Boulevard was mentioned in Boxoffice in January 1949:
http://tinyurl.com/ydguprb

I actually went there during the adult film tenure with my then-girlfriend because we thought it might be fun to watch the flick and do it in the car. Instead, we were so bored with what was being shown that we went on home. No handi-wipe either!

The location is now a Costco warehouse.