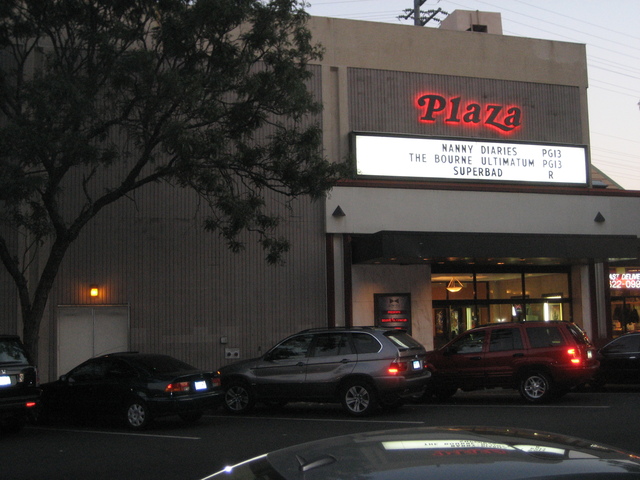 Originally opened as a 800s seat single screen movie theatre in 1970 with Barbra Streisand in a Roadshow presentation of “Hello Dolly”. It was triplexed on December 22, 1978. It was taken over by Bow-Tie Cinemas on November 17, 2006. It finally closed in November, 2020, a victim of the Covid-19 pandemic.

The Crown sign is still up on the far left, but there is a big lighted sign near the entrance which has big black letters saying “Bow Tie Cinemas.”

The Plaza was opened in 1970 by the Brandt organization as a single screen, 1000 seat house. Over the years, it was triplexed by walling off the former stadium area in the back of the theater, then splitting that area. There are 450 seats and a huge screen on the orchestra level, and two stadium seated theaters with 120 seats each. The seats were new about 4 years ago.
After its stint as a Brandt house, it became a Trans-Lux operation (new name for Brandt), followed by Cinamerica, Crown, and now, Bow Tie Cinemas (www.bowtiecinemas.com). Name should be changed to Plaza 3.

Went to this theatre for the first time today. I don’t know about the smaller auditoriums but theatre #1 was very nice. Curtains! When do we have curtains anymore? Very nice size screen too. Not much info on the site about the current quality of the theatre but I was impressed.

A new modern luxury theater is being planned https://www.greenwichtime.com/local/article/45M-train-station-project-planned-for-Greenwich-14082055.php

This opened on May 15th, 1970 with “Hello Dolly” on a roadshow policy. Grand opening ad already up.