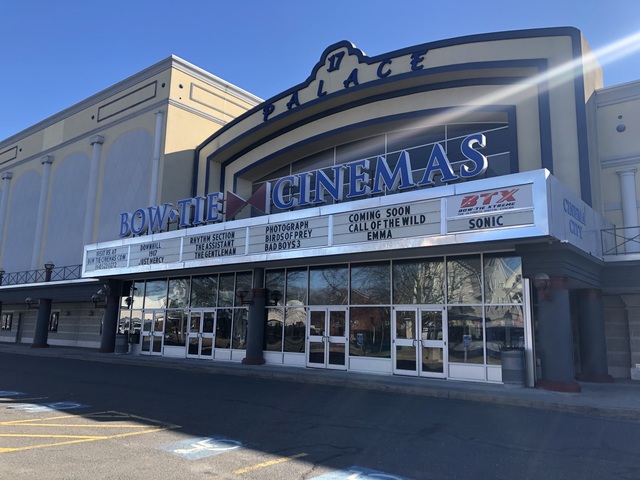 The giant screen in the Odyssey Theater is over five stories tall with a six-track digital sound system powered by 18,000 watts.

All the screens have stadium seating and Dolby Digital sound.

Bow-Tie closed this location with the Covid-19 pandemic. It was announced on June 10, 2020 that the Palace 17 will be closed permanently. It was taken over by Apple Cinemas and reopened in October 2020, with 10 screens. There are plans to turn the rest of the building into a family entertainment center.

I visited this evening and for now I’ll tell you the Cinema City section consists of part of the left wing – theaters 11, 12, 13, 14, and 15. They have their own concession stand, a few bits of remodeling and more poster cases were added, as were a pictures of the original Cinema City which I think is a nice touch in addition to the Cinema City branding that appears. Cinema City also has a dedicated box office – the box office (although I was there slightly earlier than prime time) seems to be running more efficiently than it was under Crown who would schedule every movie to start between 7 and 8 – a mess on weekends. I do have a legit complaint that I’ve voiced to corporate first – I wouldn’t want to be accused of pulling a Tomas Kent or anything.

I got a very quick response from Joe (next day) – and passes in the mail. What happened (a projection issue) could have happened at any theatre, before digital alleviating many common projection problems I counted National Amusements and Dipson Theatres (Western NY) as the best in the country for 35MM projection and even they had the occasional problem screening. There is one theatre I regularly comment on because for the past 10 years they’ve been providing poor projection at first run prices. The Palace is one that I don’t know that well, and secondly I doubt it’s the norm – I had been here twice before under Bow Tie and didn’t have any issues.

Despite the higher ticket prices and no student rate which I think is a shame with the colleges in the area including UHa which has an excellent Cinema Studies program, things look to have improved especially with the addition of Cinema City at the Palace, an additional screen for art/indie film makes me happy to see. (Film culture in Hartford is alive and well with the announced addition of a new Cinema Grill and with the growth in attendance at Hartford International Film Festival, which I was in town to screen my film at)

The Palace was designed for Crown Cinema Corporation by Port Washington, New York, architect James Thomas Martino. The City of Hartford requested the rather traditional movie palace facade, a departure from the more adventurous designs Martino usually did for Crown. The theater had a total of 3,611 seats.

The Odyssey Theater was a purpose built large screen format screen with stadium seating sight-lines quite comparable to legacy IMAX and big curved screen. I’m sure that hasn’t changed with the digital upgrade – I can only speak for it when they were showing “enhanced 35MM” in the Crown days but the sound and presentation was quite good although like IMAX the screen didn’t have masking.

(This screen is much larger than the mini-IMAX National Amusements opened at Buckland Hills – despite opening with 15/70MM they sandwiched a slightly larger screen into a 250 seat, two story room — the was of course the beginning of the “lie-max” era!)

This opened on October 27th, 2000. Grand opening ad in the photo section.

and still having trouble on November 28th

Bow Tie cinemas has announce that the Palace won’t reopen once restrictions are lifted they choose not to renewal their lease. The landlord is looking for another operater

fred 1 We’re going to see a lot of that.

This theater is being taken over by Apple Cinemas: Hartford, CT: Bow Tie Palace 17 & BTX Theater Gets New Management [Jun 19, 2020]