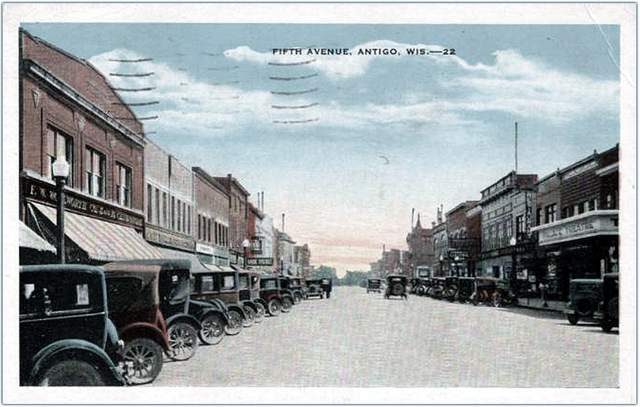 The Palace Theatre was opened in 1916, with seating for 1,100. It was taken over by J.P, Adler of the Adler Theater Co. and after a remodel it reopened as the New Antigo Theater on April 8, 1928. It had been equipped with a Barton organ. In December 1928 it was sold to Fox Midwest, a subsidiary of Fox Theatres and it was immediately closed. It was later reopened and closed for two weeks for remodeling in 1984, and has been owned by Tim Suik for 40 years.

I remember we’d visit my Grandmother who lived in Antigo every summer like clockwork. I’m from Minnesota. My brother and I got to see The Empire Strikes Back there in 1980 when we were visiting. The place was one screen at the time (I think) and they even still had an intermission during the movie!

If they put an intermission in “EMPIRE” good thing George Lucas never found out.I have read where some theatres in small towns and cities like Tampa put intermissions in movies some well under two hours long in running time,Minnesota Jones.

Yup, the intermission was just as Luke was going to go into “that place is strong with the Dark Side…” on Dagobah with Yoda looking on – and after the intermission, he was in!

Various construction trade journals from 1916 note a theater to be built at Antigo, Wisconsin, for Harvey Hansen. The architect for the project was Hans T. Liebert, then practicing in Wausau. Contracts for the project were let in July, 1916. Hansen had been operating another theater called the Palace in Antigo since at least 1913. I don’t know if the first Palace was closed when the new theater opened or if it continued to operate under another name.

Liebert designed another theater for Hansen in 1921. It was to have been located at the corner of 5th Avenue and Edison Street, but I’ve been unable to discover if this project was carried out.

1956 photo added via Bill Kelder. Palace marquee down the block on the left. 2008 street view shows the former drug store building with unique brick work on the right in the photo, as still standing.

“With people not being able to go to the theater and see a movie lets learn about the Palace Theater in Antigo… Harvey Hanson prominent theater owner was born in Appleton, WI in 1883, he came to Antigo around 1908 and started in the theater business. In 1909 the Hanson building was built on 5th Ave ( still stands today,the name Hanson is still on the building) and during this time Harvey Hanson showed silent movies to the people of Antigo, thus started the beginning of the Palace Theater. Then in 1915, Harvey leased the building to a well known five and ten cent store F.W. Woolworth, and across the street the “New” Palace Theater was going to be built. In 1916, the new Palace Theater ( capacity 1180 seats and at that time the only fireproof theater in central Wisconsin) opened and it was a successful venture and generations of movie goers attended the show house to be enthralled by Hollywood movies. On the stage were occasional vaudeville and talent shows. In 1928, the Palace was leased to Fox- Midwesco Theaters, Inc. who ran the theater until 1946, when Midwesco went bankrupt Harvey Hanson regained ownership and then in 1947 Harvey leased the Palace to Lucille Fowler of Merrill until 1958. The Palace Theater was one of the largest and best known motion picture house in northern Wisconsin. In 1959, the Palace Theater was purchased by James and John Suick from Agnes Hanson. In 1971, James Suick son Tim purchased the Palace Theater from his dad. Today it is still owned by Tim and Barb Suick.”