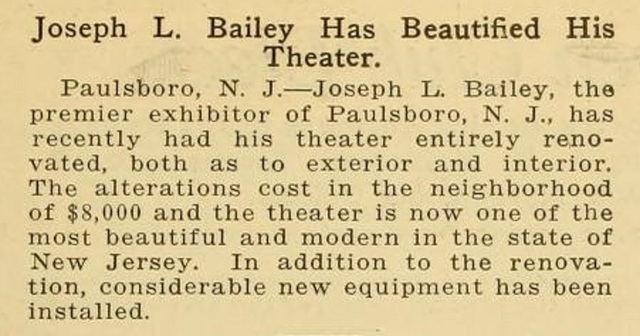 The Bailey Theatre opened in 1915 as Paulsboro’s first theatre. In 1918, purchased by Alfred W. Hill and renamed the Hill Theatre. When Hill built a new Hill Theatre, he renamed this one Boro and ran both for many years.

This theatre is listed in the 1951 Film Daily Yearbook.

“Paulsboro was now changing from a residential town to an industrial town. The first movie was shown on the second floor of the Bailey Building. Movies were shown in the "Auditorium” twice a week. Friday was dance night and the young men brought in girls from the surrounding areas because there was a shortage of girls in town. A law was passed stating that movies weren’t allowed on the second floor and Mr. Bailey built a movie house which opened to the public on April 29, 1915.“
from the history tab of http://www.paulsboronj.org/