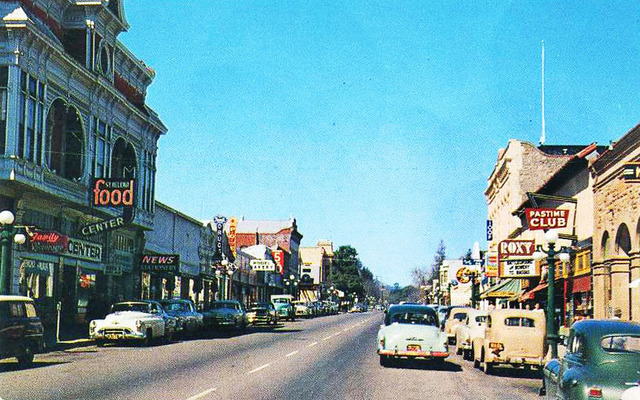 It was given a makeover and reopened later in 1976 as the Liberty Theatre which closed in 1996. The theatre was gutted and reopened as the Cameo Cinema on August 7, 1997. It has the classic inverted V marquee extending out from the building along with a vertical sign spelling out “Cameo”.

Hi there!
As the co-owner of the Cameo Cinema in St Helena, CA, I’d like to update the information contained in your profile of our theatre.

An article about the Cameo that appeared in the San Francisco Chronicle: View link

The Cameo Cinema opened in 1913 and was originally known as the Liberty. It’s name was later changed to Roxy and starting in 1953 was owned and operated by John Aquila who became St Helena’s mayor from 1959-1976 and again 1988-1990. After being closed for a while (in the early 1970’s as I recall) it was reopened as the Liberty by another independent operator. It was still later operated by a small chain and after yet another closing Charlotte Wagner purchased the theatre in 1997, did a beautiful remodeling job, reduced the seating capacity and turned it into a little jewel box now known as Cameo Cinema. Cathy Buck purchased the Cameo from Wagner several years ago and continues to operate it with an eclectic mix of film programming. Every small town should be so lucky as to have such a cinema gem in their community. When I’m in the Napa Valley I always try to catch a show at the Cameo.

The Cameo will celebrating its centennial in 2013 with special events and some renovations: View article

The Liberty had sat dormant for many years until the late 70s, when good friends of mine, Bill Cook and Paul Gartin, re-opened it. I worked there as a projectionist for about a year.

The old carbon arc projector lamps made for sweltering summer nights in the projection booth! Every now and then, the film would jam in the projector and the heat from the lamps would melt through the film in an instant, making for a light show of sorts on the screen.

Francis Ford Coppola screened a few new films at the Liberty around 1980, with free admission as gifts to the community. It made me nervous, running brand new film that were his personal prints.

I recall showing a film there—I don’t recall the title—that we shared with another old theater a few towns away to save rental costs. We started one 20-minute reel and when it was finished, one of us would hop in a car to drive it over the hill to the other theater, so we had a relay running the whole length of the film, about six trips, which made for a long night.

Lots of good memories from the old Liberty.

The New Turner Hall was christened on December 31, 1885. In 1909, Julius Goodman and Joe Walesky purchased Turner’s Hall to go with full-time motion picture operation. They did so beginning on May 31, 1909 as the renamed G & G Theatre. During World War I, the theatre changed names to the more patriotic Liberty Theatre beginning on November 12, 1915. The Liberty closed March 16, 1940 as new owners took on the venue.

On April 12, 1940, the theatre became the Roxy Theatre with a grand opening featuring “Broadway Melody of 1940.” The Roxy closed on January 12, 1976. In 1976, the theatre was given a drastic makeover returning to the name, the Liberty Theatre. The Liberty closed in 1996 likely at end of lease. Another operator gutted the theatre giving it a modern theatrical experience reopening as the Cameo Cinema on August 7, 1997. It was still open as of the 2020s.

Believe it or not, this one of the more impressive theaters I’ve ever been to. Around the mid-2010s, they upgraded this theater with Dolby Atmos sound and a Barco 6K laser projector, one of the only single-screen theaters in the world to have one. I’ve been there a handful of times, and the Dolby Atmos is gorgeous, 3D showing or not.