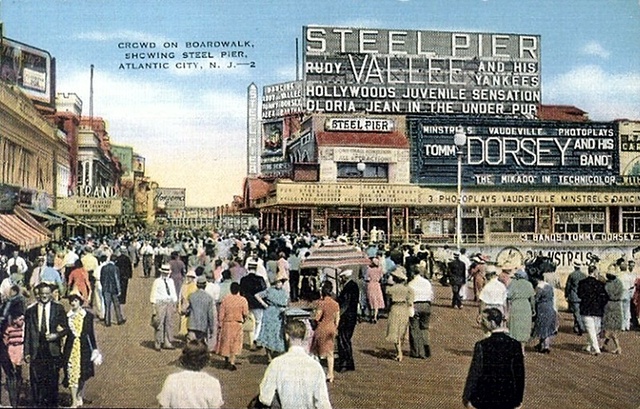 The Criterion Theatre was operating as a live theatre in 1910. It was listed in the 1914-1915 edition of American Motion Picture Directory. By 1926 it had been renamed Strand Theatre. Listed in the 1941 edition of Film Daily Yearbook as part of Ventnor Realty & Leasing Co. They were still the operators in 1970.

It most likely was demolished for construction of one of the casinos.

I wonder what the actual demolition date was? It was still around in the late 70s when I was in high school.

Here is a larger view of the 1939 postcard. I worked at the Planters store one summer in high school.
http://tinyurl.com/3zocxg

Thank you, Ken. Great perspective on the Strand and the late, great Steel Pier.

I visited the booth around 1971, or 72. Al Greenwood was the operator. When he did a change over, the sound change was large wall mounted dial called a fader. It was made by Western Electric.

I think that’s the one in Ocean City.

The Strand Movie theater was leased, run and operated by George R Perry and Perry Management. It was operated by him in the 70s at the time when the casinos were first opened. It was later sold by the owner (believe to be Charles Tannenbaum to the casino industry).

In the late 60’s and 70’s it was run by Apollo Circuit Theaters. When Frank theaters purchased the chain they did not get the Strand. In 1974 the named was changed to Talkies and showed old classics. In 1975 it was run by a gentlemen named Lero from Phila and changed back to the Strand. They ran The Towering Inferno all summer with a Fri and Sat midnight showing of the Divine flick Pink Flamingos. IN 1976 the theater changed hands again and operated until the late 80’s.

Criterion Theater was apparently the original name prior to 1943. Previously managed by Edward J. Dougherty who died at 56 in 1943.