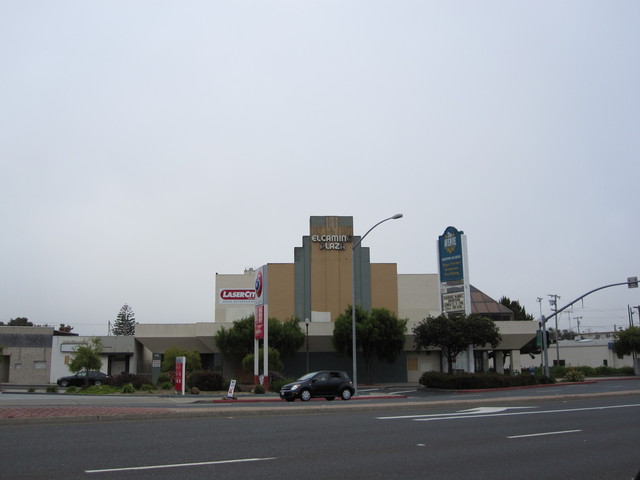 The El Camino Theatre opened in 1930. The movie theatre was equipped with a stage house. It closed around 1974 and went over to retail use.

The El Camino Theatre was demolished in July 2015.

The El Camino was on San Mateo Avenue close to the El Camino Real in San Bruno. It was called “the el camino 50 cent” theatre, as all seats were 50 cents! It had a vertical sign, in blue, with El Camino in white letters. The marquee was blue and they used black letters that fell off all the time, or the kids would go by and change them around. It had an island box office, that they never used, and you purchased your tickets inside. The auditorium actually was beautiful inside, with murals of covered wagons, western style. When i went there, (we are talking 1968) it was crowded with kids and family. during the intermission you would see the kids climb up on the stage and play around and no one would say anything. The curtain was red, but broken, the screen had a piece of tape dead center when someone threw a can through it. there was a loge section, but it was closed off. Was only in there once, but remember it well. It then was converted to a office building.

The island was used still in the 1960s and the name was El Camino Theater. It became El Camino Theater ‘The 50 cent Theatre’ in 1970 or so. I think it closed in 1974 due to fire hazards and was sub-divided in to shops. It almost became a Micheal Brothers but city stopped that from happening.

A July 23,2007, article from the Peninsula Examiner (Google cache because the Examiner’s website bites big) said that this theatre opened in 1930. The article also said that a developer had recently applied for a permit to demolish the building, to make way for a mixed use development. There’s a photo of the exterior which looks as though it’s been pretty drastically altered already, with the whole front walled up. There’s probably even less left to lose inside.

When a bank occupied the building, one large chandelier and a series of small ones were worked into the bank decor. They were obviously from the theatre days.

I remember going here as a kid and when in high school. A bunch of us saw MAS*H here. There was a big, round, lighted clock to the right of the screen (the only time I’ve ever seen a clock inside a theatre auditorium). It said ‘Bostrom Jewlers’ on it, which was the name of a jewelry store down the block.

I wonder where that clock is now? I remember one very rainy night, a group of my friends and i were watching Joe Cockers Mad Dogs and Englishmen, it seems the storm drains in front of the theater backed up, water came into the lobby and proceeded to flow down the isles and pool in front of the screen, the lights came on and the theater offered a refund, but we were hard core El Camino Patrons as well as being 17 and a little dumb and a little stoned,we stayed to the end! Thanks for the memories El Camino.

We found this theater by accident, doing some used car shopping in the lot across the street. It was playing Tora Tora Tora. We went to go see it but the theater was closed because of flooding (it was raining horribly that day) and we were told to go to the State in South City to see it. After reading TooTall’s post, I wonder if this was a regular occurence there? What was funny was that in the box office there was a mannequin sitting in the seat with a sign around it’s neck saying closed for today.

I saw one movie here – I was about 5-6 in 1970-71 – a Disney double feature focused on wilderness in America with my father and brother. I think one of the movies was “The Living Desert”. I think we were there because my mother and sister were hosting a baby shower or bridal shower and we had to get out of the house.

Sadly, the El Camino was demolished in July 2015 to make way for new development.