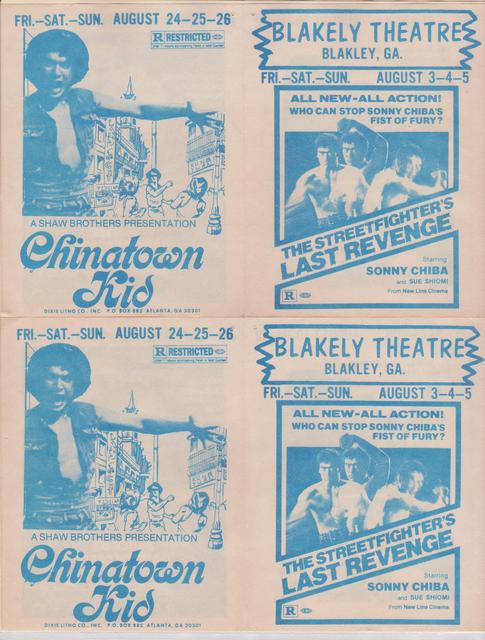 The Blakely Theatre was built in 1930’s. It is now being restored for live performances.

Very cool link. I couldn’t find anything further for this theatre.

Here is a photo a friend gave me.
View link

A 1986 view of the Blakely Theater in Blakely.

The Blakely theatre was owned by Kate (Dunn) Peters and was part of the Dunn Family Theatre Circuit. She also owned the Peters Drive In theatre in Blakely along with the Archie and Bennett Drive In in Abbeville, AL. She also owned a drug store next to the theatre. It was located across from the courthouse. The theatre never operated on Sunday night. Mrs. Peters felt she would get in trouble with the Baptist Church down the street. It never had a concession stand, but had a popcorn machine in the box office and a soda vending machine out front. The theatre used coal for heat and the screen was covered with coal dust. It used motiongraph projectors. In its later years, it ran mostly black explotation movies and was segarated until the end. The balcony had a sloping floor with pews, this is where black patrons sat. In its later years, she never used the marquee even though I brought her a comple set of letters. After the theatre closed, the marquee was removed because some of her neighbors thought it would fall down. She had a soda fountain in her drug store and she made the best chili dogs and ham sandwichs anywhere. Her son donated the theatre to a group who has renovated the theatre for performing arts (I hope they changed out the furnace).

Kate was my Aunt, a lady with tons of energy, and a good heart. I loved Blakely. Her son is still there. Spurgeon Dunn, her brother, my father, also had theaters in No. Fla. and So. Ga.