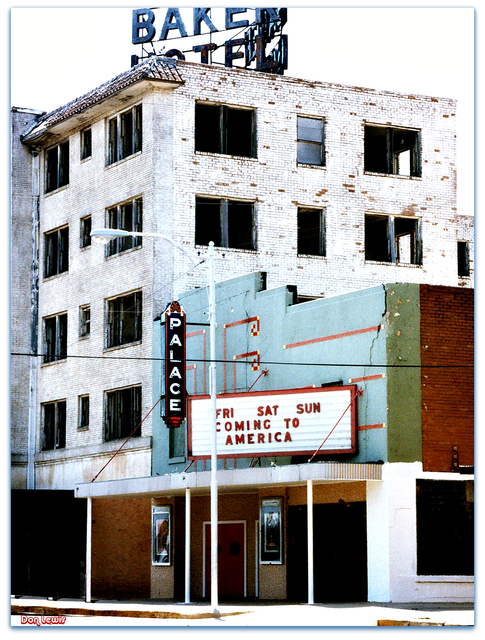 The Palace Theater is a small 732-seat theater adjoining the Baker Hotel building. It had a vertical sign attached to and extending from the front of the building that spelled “Palace” in white letters on a blue background.

Renovations were carried out in 2007 and it reopened as the 3M Palace Theater.

There is a March 1987 photo on this page:
http://tinyurl.com/yaax7s

The Palace Theatre in Colorado City has now re-opened and is called the 3M Palace Theatre. I have not been able to attend a show there but will soon.
It looks almost exactly the same as the photos here, only the top part is now beige with the same red stripe designs, and the vertical “Palace” sign is now gone. The marquee looks exactly the same.

For a while in the early 2000’s the theatre was a secondhand store. The concession stand area looked pretty much intact but all the theatre seats had been removed.

Here is a myspace page with some information about the theatre and a small current photo.
View link

A 1987 photo of the Palace in Colorado City.

The palace was bought 4 years ago and is OPEN. They are in the process of restoring it to its former glory.

I lived with my brother and his family in Colorado Springs TX in the summer of 1991. There wasn’t much to do in this town and one hot day strolling uptown, my nephew and I found this closed theatre. It wasn’t even locked! We decided to explore, being movie buffs (and still are). Everything was very dusty as I remember. The first thing I remember seeing was the concession stand. The popcorn machine still had popcorn in bags ready to be purchased, hot dog weinies (very wrinkled by this time) in their machine ready to be bought also. One sheets were scattered on the counter, Ruthless People, Top Gun, Ferris Bueller-still have them in my collection-It was if this place had just closed like always for the night and was ready to be opened the next day, just didn’t happen. We were wanting to explore behind the huge movie screen, all seats were intact, but we didn’t have a flashlight and it was very dark inside the auditorium. We braved going upstairs because the windows allowed some light to shine through. We found the projector room with the huge, shiny steel green projector that was ready to be run again. Next door to that room was a room filled with dozens of film cans, some had movies in them and some were just empty reels. By this time I being the older of the 2 of us, thought we had better be leaving, because we were tresspassing after all. Still remember this day vividly!!

I was recently behind the 3M Palace in Colorado City. There is a natural gas compressor piped into the building. It no longer looks useable, but I believe at one time, some theaters were cooled with dry air this way. I had read about it, but never saw one till now.