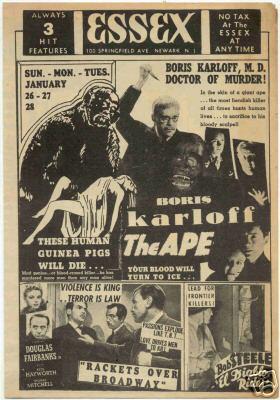 This was originally a vaudeville house (one of the first places George Burns and Gracie Allen worked). It was closed and presented a rusting marquee as far back as I can remember (the early 1950’s). Since most vaudeville houses added films to their program in those days, I would assume the Essex qualifies as a cinema. The Essex was, however, according to a George Burns interview, a theater that had never seen better days. It depended on an adjacent building’s boiler room to provide heat for the vaudeville performers and never did more than bare bones business.

There was a full page photograph of the Essex in the Newark Star Ledger a few years ago, date and time elude me, mea culpa! Anybody out there with more info on the Essex?

The Essex Theatre was located at 100 Springfield Avenue, Newark, NJ. It is listed as the Essex Theatre from at least 1940 in Film Daily Yearbooks and is also listed in that publication from 1940-1955 as operating as a Negro theatre.

Must have been used for relgious gatherings shortly thereafter:

“This Message by Brother William Marrion Branham called Sirs, We Would See Jesus was delivered on Wednesday, 11th December 1957 at the Essex Theater in Newark, New Jersey, U.S.A.
The tape, number 57-1211, is 1 hour and 36 minutes, and consists of 1 cassette.” excerpt from http://www.nathan.co.za/message.asp?sermonum=447

Here are some excerpts from that article:

By the way, Burns remarked to a Star-Ledger writer in 1947, did you know that the first vaudeville date Gracie and I played together was in Newark? Almost 25 years ago, I guess, and I think it was called the Hill Theatre, over on Springfield Avenue.

Allen agreed to team for a “flirtation act” written by Burns, who got them a three-day booking in Newark at the Hill (later Essex) Theater at 100 Springfield Ave., one of those decaying theaters that had never seen better days. Together they were paid $5 to perform three shows a night.

That place was so primitive there was no heat backstage, said Burns. We opened there in mid-winter and nearly froze in the dressing rooms. Had to run down to the basement and warm up in the furnace room before we could go on.

There is a dismal looking AP file photo from 1969 in today’s Star Ledger. The article recounts the 1967 riots.

This is from a 1936 NJ Supreme Court case. It looks like the parent company ran two theaters in Newark at that time, the Essex and the Congress:

Prosecutor was an employee of Mira Theatres Corporation, which appeared to control two moving picture houses, one called the Essex Theatre, at No. 100 Springfield avenue, Newark, the other called the Congress Theatre on South Orange avenue, also in Newark. The Mira Corporation carried compensation insurance with the Ocean company, defendant above named, covering accidents at the Essex Theatre and that alone, though including in item 6 of the coverage clauses, “all operations necessary, incident or appurtenant thereto, or connected therewith, whether such operations are conducted at the work places defined and described in said declarations or elsewhere in connection with, or in relation to, such work places.”