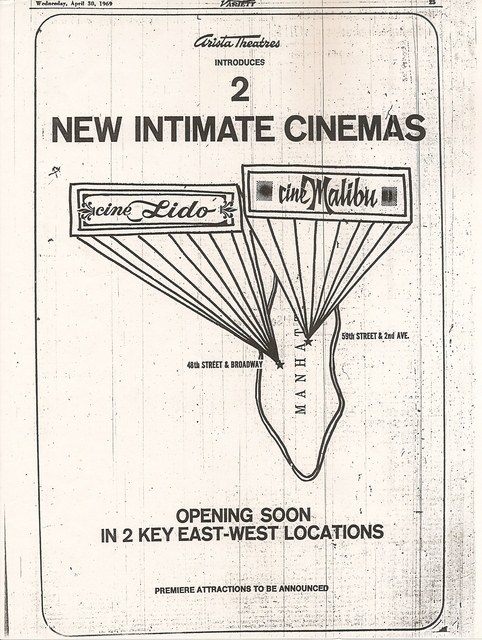 “So this is gay Paree

Come on along with me,

We’re stepping out to see

The building was originally the Palais Royal, a legitimate theatre and concert hall, later housing the Broadway location of the Harlem-based nightclub, Connie’s Inn. At various other times, it became a Chinese restaurant, and then George White’s Gay White Way nightclub. In 1935, it became the Club Ubangi, featuring live African-American entertainers and showgirls. In 1936, it became the second location of the famed Cotton Club, originally in Harlem. This Cotton Club lasted until 1940. In 1942, the Latin Quarter nightclub opened in this space.

Nick Justin’s Arista Theatres were in the market to capture the trend of fashionable upscale sexually-liberated Manhattanites, willing to shell out top dollar for the classy, soft core, beautifully filmed works from the likes of Radley Metzger, director of “Camille 2000”, “Therese and Isabelle” and “The Lickerish Quartet”.

Opening with the aforementioned “Camille 2000”, the theatre, and its sister location the Cine Malibu on the east side (it eventually sprang the Lido East as well), the theatres were an immediate success with the film getting rave reviews and the X-factor theme an instantly acceptable concept.

A major raid of eleven New York film houses in July 1975 lead to the closing of the Cine Lido and confiscation of a print of the “The Newcomers”, a symbolic act to satisfy the puritans since the movie opened again the next day. Several other theatres were closed in the raid when they turned out to be showing bootleg prints of their films but content censorship remained elusive. The sole proprietor arrested was World Theatre owner Robert Sumner with his hit film “High Rise” confiscated. The arrest was considered payback for bringing “Deep Throat” to New York the previous year.

By 1977, even the New York Times yielded to pressure and stopped accepting ads for X-rated fare. This signalled the end of the Cine Lido’s ability to reach its target audience and by May 1978 the location was being advertised for lease.

It went on to operate as the 22 Steps disco and the legitimate Princess Theatre before being demolished in 1989 for a high rise.

I found an old article that states the landlord was none other than E.M. Loews, who evicted the Latin Quarter due to overdue rent. Does anyone know if E.M. Loews was the actual operator of the Cine Lido and Cine Malibu?

The Latin Quarter was the incubator of the Golden Era of Hip Hop 1985 – 1988. It was the scene of epic battles and performances..ie KRS-One vs Mele-Mel., KRS-1 VS MC Shan etc.. It was where folks like Public Enemy, Queen Latifah, Big Daddy Kane, Eric B & Rakim, Salt & Pepa, Kid & Play, 3rd Bass, Schoolly D, Jungle Brothers and numerous others went to get their start.

We relive those lofty days with Paradise Gray of X-Clan.. he was the one who ran the show back in the days and he has lots of insights and stories to tell. Enjoy the interview

I was the owner of the Princess Theatre on Broadway and was the one who re-opened the Latin Quarter. I have film footage and memorabilia from the original LQ both in NYC and Palm Beach Fla. I have also got stuff from Cab Calloways Cotton Club which was located there prior to the LQ. I also was the one who changed it to the first, biggest an best Hip Hop and rap club shortly there after. I was young and it was a lot of fun being a part of New Yorks history.

@Steve that is awesome. Do tell more (i love this historical experiences )

Cine Lido among the 1971 photos in below link.