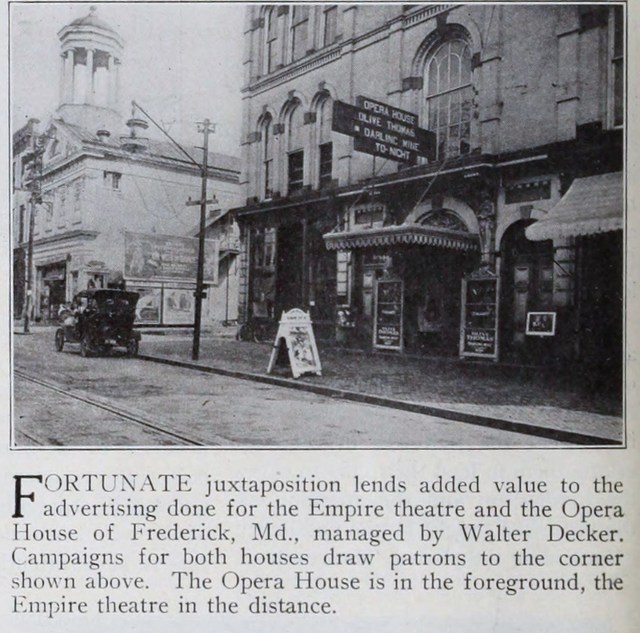 The Frederick City Opera House was built in 1891. It was operated by the city of Frederick as a venue for vaudville, stage shows, and community events. The theater featured a balcony and four opera boxes along the side walls. In 1921, the theater was renovated with sound equipment and movies were first shown in 1922. The theater was the first to show “talkies” in Frederick. By 1941 it was operated by Warner Bros. Circuit Management Corp.

The City Opera House closed in 1961. When the theater closed, the stage, opera boxes, balcony, and orchestra pit were all demolished. However, today, the the facade of the building remains the same.

The City Opera House in Frederick is listed in the 1897-98 edition of the Julius Cahn Official Theatrical Guide. P.E. Long was the Mgr. and it had 900 seats (probably rounded up from the 860 listed above). The theatre was on the second floor; the proscenium opening was 25 feet wide X 20 feet high, and the stage was 24 feet deep. There was one daily and 3 weekly newspapers and the hotel for show folk was the Carline House. The 1897 population of Frederick was 10,000.

Tere is some information about the building from the current occupant’s site. Click on “history”.
http://www.brewers-alley.com/