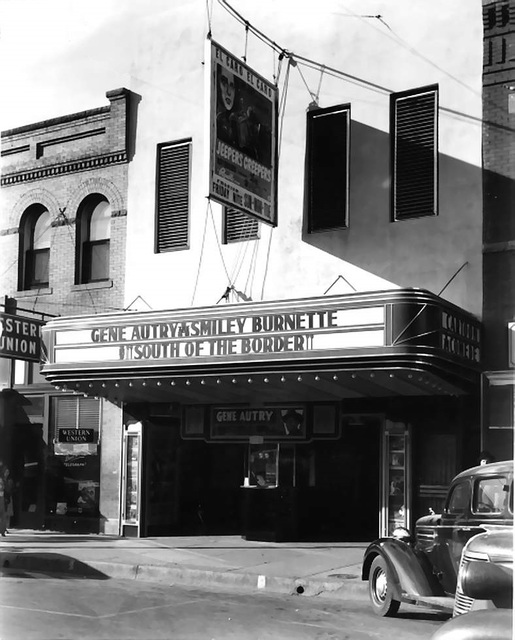 In 1937, Paramount Pictures utilized the same blueprint for the El Caro Theatre in El Reno, OK, that they used to build their Inca Theatre in Okmulgee, OK. Both floor plans had the same lay out, but architectural styling was slightly altered from Mission Revival (for the Inca Theatre) to Spanish Renaissance for El Caro Theatre.

The El Caro Theatre was destroyed by fire on December 23, 1943. On February 26, 1945 Griffith Theatres opened the newly built Centre Theatre on the site.

I spent some time in El Reno last month. I didn’t know about this theater, which is too bad as I did quite a bit of walking in the downtown area.

According to this article, a Centre Theater at 111 South Bickford sustained some wind damage on April 29, 2010. Is this same theater as the El Caro which the above comment places at 111 North Bickford? View link

Address for the El Caro should be updated per the comment of 12/9/06. The map view corresponds with the photo in the description.

Thanks; I will put the article’s URL where it should be.

What a pretty little cinema the El Caro was. A romantic setting in which to watch a double feature and enjoy a box of popcorn.
http://www.roadsideoklahoma.com/node/346

A period photo of this theater is available in the Oklahoma Historical Society archives. Honestly, the Safeco building, while very cute, does not resemble the building in the historical photo. The theater in the historical photo could possibly have a stucco facade, but the windows appear to be wider spaced and the buildings beside it do not match either. Perhaps the entire block was damaged. Hopefully more research will nail down the location of this theater with certainty. Go to this URL: http://tinyurl.com/6c5a8gg and typed in “El Reno Caro.”

There is a picture of the El Caro Theatre in the book Legendary Route 66 (page 134).