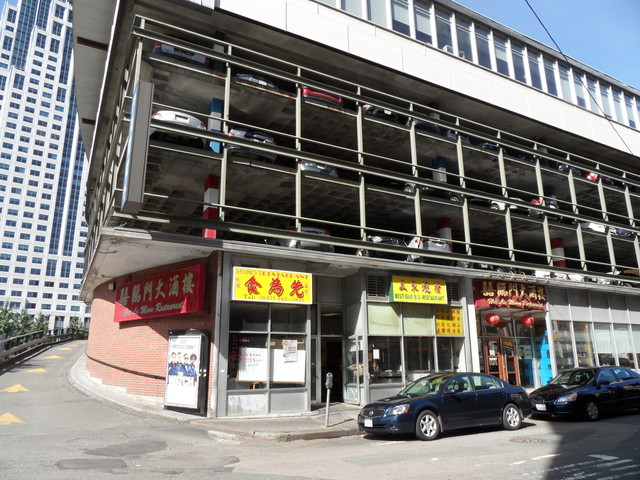 China Cinema occupied the ground floor of a huge, ugly parking garage, just across the Central Artery from the Chinatown Gate. I do not know when it opened, but the garage looks like a 1960s building, and I’ve found advertisements for the cinema in 1971 issues of the MIT student newspaper.

It was the most long-established of three Chinese-language cinemas that operated in Chinatown in the 1970s and 80s, and it appears to be the only one built especially for that purpose. Martial-arts films were especially popular.

The China Cinema closed in 1987, according to a Boston Globe article published August 20, 2006. It and the other Chinatown cinemas could not compete with the growing popularity of home video rentals.

A Chinese restaurant now occupies the former location of the China Cinema. A movie poster board still faces west from the side of this building, but it now advertises standard Hollywood studio fare playing elsewhere.

Here is a page from MIT’s student newspaper The Tech, from October 22, 1971. At the bottom left corner is an ad for the China Cinema.