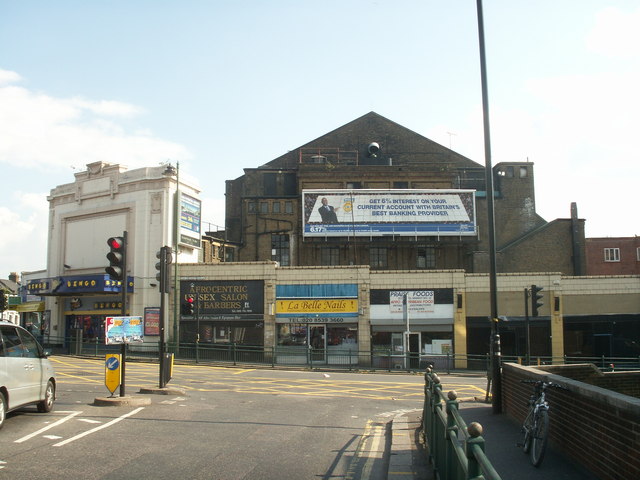 The following is taken from Ken Roe’s notes for his organised Cinema Theatre Association visit (“A Walthamstow Wander”) of May 1997:

Opened:-26th December 1928 with the Fox film “Lost in the Arctic”, a silent documentary style picture, plus Lila Lee in “A Bit of Heaven”, a silent comedy and ‘Pathe Gazette’, ‘Pathe Pictorial’, Mewse and Singer & Company on stage in “Moonlight Frolics”.

Located on the corner of Lea Bridge Road and Church Road, Leyton in east London. The Savoy Cinema was built for Hyman Cohen as a cine/variety theatre. It was designed by noted cinema architect George Coles to be a slightly smaller version of his Broadway Cinema, Stratford, East London which opened one year earlier for the Hyams Brothers.

The rather low facade in the English Renaissance style, was set on the corner of two roads and was faced in cream Hathernware terra cotta tiling. The entrance was flanked on either side by a number of lock-up shops which were faced in similar tiling.

Inside, the vestibule was decorated in marble work and Roman stone. The auditorium was painted in coffee cream with gold highlights and there were pastoral plaques around the walls. Blue carpets were laid throughout and the seats in both orchestra stalls and circle were covered in an old gold coloured fabric.

The John Compton ‘Kinestra’ organ console was situated on a lift in the centre of the orchestra pit and the organ chambers were located on either side of the proscenium opening. After a few months as resident organist, Edgar Peto was replaced by Reginald Halcrow.

On 29th June 1929 the Savoy Cinema became the first cinema in the area to show a ‘talking’ picture, Al Jolson in “The Singing Fool”. A specially constructed speaker enclosure, designed by George Coles was built at the rear of the stage.

The Savoy Cinema was sold to United Picture Theatres in 1930 for an excessive GBP100,000 and was managed by Gaumont British Ltd. from July 1930.

During the war, bomb damage caused temporary closure of the Savoy Cinema for one month in October 1940. It was re-named Gaumont in February 1950 and CinemaScope was first shown here in February 1955. In March 1964 it was re-named Odeon, but was leased to Panton Films in December 1969 and re-named Curzon. Closure to films came in July 1971 when the building was converted into a full-time bingo club. Classic Cinemas then took control and and planned to open two cinemas in the former circle area, but eventually opened a 435 seat single screen in the circle called the Classic Cinema. The opening film was Charlie Chaplin in “The Great Dictator”, full time bingo continued to operate in the former orchestra stalls area. It was at this time of conversion that the Compton organ was removed from the building and the console was installed in the Town Hall, Louth, Lincolnshire.