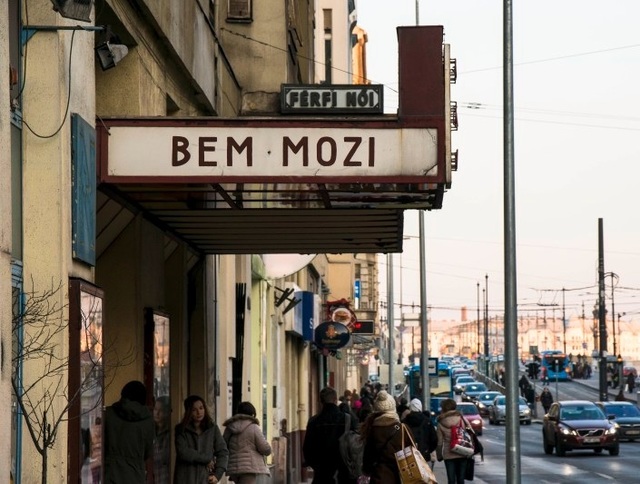 Located in the Buda side of the city, the small Bem Cinema originally opened in 1916 as the Helios Kino. In 1934 it was re-named Admiral Kino.

Today named the Bem Cinema, it screens Hungarian art house movies and independent movies plus some critically-acclaimed American movies. It also screens seasons of Hungarian movies from the 1960’s and 1970’s as well as French films.

The Bem Mozi is quite small and something of a dump, but it’s steeped in history.

During the 1960s and early 1970s, this small, long but narrow cinema was called “Budai Hirado.” It was one of the two film theaters in the Hungarian capital where they showed the weekly newsreel (about 10 minutes long), followed by all sorts of animated and live action shorts & documentaries. The program cycled through in about 75 minutes, but one could purchase a ticket and enter the theater at any time, and stay as long as one wanted, even all day. There was the newsreel, followed by 3, 4, or 5 shorts.

The other Budapest theater dedicated to the newsreel and shorts was the “Hirado” cinema on the Grand Booulevard, present day NE corner of Erzsebet Korut & Dohany utca. Here you could even get seats in private booths in the back, very cozy for lovebirds.

I seem to recall the uniform ticket price being 4 forints, but it could have been 6 Ft. Certainly a far cry from the 1200 forint and even higher admission prices of today. You could also buy passes, and receive further discounts for students and seniors.

After the Hungarian weekly newsreel was killed-off, the theater was re-named from “Budai Hirado” to “Bem.” It is still a classic little art house. One of the few remaining venues from the classic era of Hungarian film theaters.