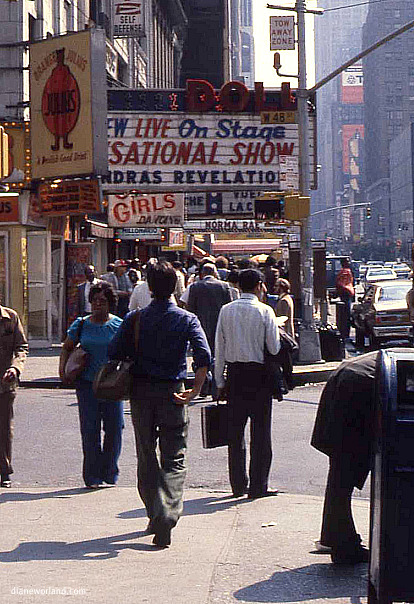 Lost Memory pointed me in the direction of a flickr.com account that has a great many B&W images of the area, circa October, 1970.

Here’s a shot of some street corner musicians plying their trade outside the Metropole Cafe on Seventh Ave near 48th Street. You can make out a portion of the Doll marquee across the street (adjacent to the Orange Julius joint). Click on the previous couple of photos in the stream to get a few views looking in the other direction up Seventh towards the Metropole sign.

I love this stuff.

Help me with this one, what was the Mini Cinema where Animal Lover is playing?
View link

I think this was a converted storefront and possibly also the illusive Frisco.

Elusive indeed! I added a page for the Frisco a few months back, RobertR. This is the first ad I’ve seen for the New Mini – which I believe may have been redubbed Frisco around ‘73 or so. It would have been a block north and on the opposite side of Seventh Ave from the Doll just a few doors up from the Avon 7.

Here is an image of the Doll marquee at night. The image is a screenshot of some vintage circa 1972 stock Times Square footage incorporated into the excellent documentary “Inside Deep Throat.” You can glimpse a portion of the Spanish-language titles on the Cine 1 & 2 marquee just behind the Doll’s on the right side of the image. In the panning shot that comes to rest on the Doll marquee in the footage, the camera passes the darkened DeMille marquee on which one can make out the words “Closed for renovations” – no doubt the triplex conversion that would result in the theater’s re-opening as the Embassy 2,3,4.

Just to correct the last sentence in my previous post. I found a comment posted by CT member Warren on the Embassy 2,3,4 page back in 2004, where he writes that the DeMille Theatre had closed in Sept of 1974 to undergo repairs after a fire had damaged portions of the balcony. The theatre re-opened in August 1975, still using the name DeMille. The theatre did not become a triplex until November of 1976 – as the Mark I, II and III. That would date the image I posted above of the Doll marquee to no earlier than 1974, and perhaps as late as 1976, depending on the reason for the renovations noted on the marquee in the clip from which I snagged the shot.

This is a photo from yelp.com. I was in Times Square a few months ago, and I’m reasonably certain that the deli is still at 719 Seventh Avenue.
http://tinyurl.com/5k8rou

There is a photo of the Doll along with this survey of Times Square food joints in the sleazy days. I think I ate at a few of those:
http://tinyurl.com/59k9ta

On March 26, Swann Auction Galleries will be offering the original design for the marquee at the Doll Theatre from 1970. Here’s an image: View link